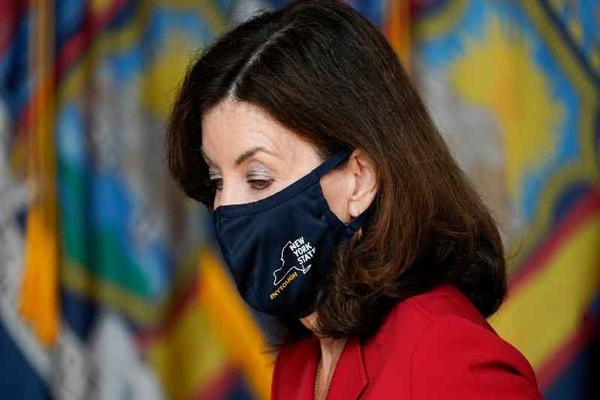 (breitbart) – New York State has declared a state of emergency over the Omicron coronavirus variant, despite the fact that 100 percent of New York’s sampled cases in the last two weeks were the Delta variant of the virus.

“We continue to see warning signs of spikes in COVID this winter, and while the new Omicron variant has yet to be detected in New York State, it’s coming,” Hochul said in a tweet on Friday.

“Today I signed an Executive Order to help @HealthNYGov boost hospital capacity ahead of potential spikes,” she announced:

According to the Hill, “the executive order, in effect until at least Jan. 15, allows nonessential procedures to be postponed in hospitals in order to increase hospital capacity.”

Hochul is also urging New Yorkers to “use the tools that we know help prevent the spread of this deadly virus,” which she listed as wearing a mask indoors, washing hands, and getting vaccinated. She begged unvaccinated individuals to get the shot “as soon as you can.”

Hochul’s executive moves come despite the fact that New York has not recorded any cases of the Omicron variant.

For samples of SARS-CoV-2 collected between November 7 and November 20, 2021 from New York State that are sequenced and entered into Global Initiative on Sharing Avian Influenza Data (GISAID), 100% were the Delta variant, compared to 99.2% in the previous two-week period.

In response to the variant, the U.S. will restrict travel for non-U.S. citizens from South Africa, Botswana, Zimbabwe, Namibia, Lesotho, Eswatini, Mozambique and Malawi.

Meanwhile, the World Health Organization (W.H.O.) has admitted that it skipped naming the new variant “Xi” to avoid “stigma” to anyone who may be named that — an obvious concern related to the Chinese dictator.