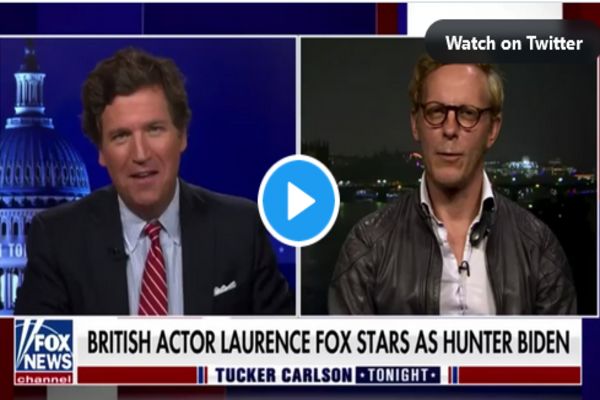 (breitbart) – Actor Laurence Fox appeared Wednesday on Fox News’ Tucker Carlson Tonight during which he spoke about his starring role in My Son Hunter, the new movie from Breitbart News that dramatizes the debauched personal life and shady business dealings of Hunter Biden.

Laurence Fox began by joking that he is glad to still be alive to talk about the movie, the implication being that he hasn’t been killed for taking sides against powerful Democrats.

“I’m grateful for the fact that I haven’t mysteriously fallen from a sixth floor balcony or accidentally hung myself in the last day,” he said.

“You haven’t been ‘Epsteined,’” Carlson replied.

The British actor explained what he discovered playing Hunter Biden. “I learned that Hunter is a man that wants to please his father. But ultimately it would be funny if it wasn’t that this family basically seemed to have sold the entire of America’s future to the Chinese, on the sly.”

“I cannot confirm nor deny if I had stage fright that day, Tucker,” Fox replied.

Fox said: “The most important thing actually is that the film is watched by the remaining sane Democrats as well because these conversations are the ones that are the things that change culture.”

“Back in the day this film would have been made by Oliver Stone,” he continued. “It wouldn’t have been down to small, independent filmmakers to make it. Hollywood would have lapped it up. It shows how badly Hollywood has been corrupted by the woke ideology, that they won’t go anywhere near this. Along with the FBI.”

More recently, he has become an outspoken champion of free speech and anti-wokeness, a decision that has led to his being canceled by the mainstream entertainment industry. He founded the Reclaim Party in the U.K. and ran for mayor of London last year.