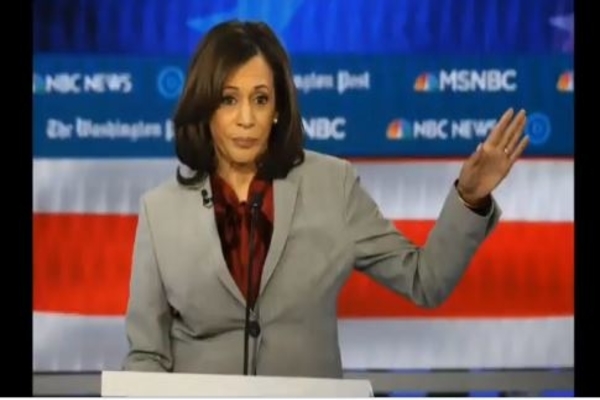 (foxnews) – The New Hampshire Republican Party called out Vice President Kamala Harris for visiting the #wrongborder as she heads to the Granite State for a visit.

Harris is visiting New Hampshire for the first time since 2019 when she was still a senator from California running for president.

The state’s Republicans were quick to call the vice president out for visiting the state — where Democratic Sen. Maggie Hassan is expected to face a tough race in 2022 — before she’s traveled to the southern border amid the ongoing immigration crisis.

“Welcome to the #WrongBorder, [Vice President Kamala Harris]!” the New Hampshire GOP wrote on Twitter. “As you travel over 2,300 miles away from El Paso, our country would be better served with an official visit to our southern border, not a campaign trip for [Hassan].”

New Hampshire GOP Chairman Stephen Stepanek torched Harris in a statement to Fox News, saying the vice president told her 2020 presidential run supporters in the state that she was “committed to fixing” the situation at the southern border.

“Vice President Kamala Harris would serve our nation better by tackling the crisis at our southern border instead of campaigning with Maggie Hassan near our northern border. Harris last visited our Granite State in 2019, telling supporters that she was committed to fixing the ‘inhumane’ activities towards our country’s southern border,” said Stepanek.

“Now Harris returns almost two years later, but how will she answer to these same individuals, while blatantly ignoring the crisis she’s been specifically charged to handle? Granite Stater’s don’t want another photo-op, they want strong leadership and accountability,” she added.

“Her event in Plymouth is about 100 miles away from our northern border and a staggering 2,355 miles from the worsening crisis in El Paso, Texas.”

The vice president’s office did not immediately respond to Fox News’ request for comment on the New Hampshire GOP’s criticism.

Harris has come under fire recently for not visiting the southern border after being tapped by President Biden to be the point person in dealing with the growing crisis last month.

During a roundtable on the Northern Triangle on Thursday, Harris said the main challenge in dealing with the crisis is “addressing the acute and root causes of migration away from that region, the reasons people flee.”

The vice president said that most of the migrants fleeing to America “don’t want to leave home” and listed reasons as to why people are illegally immigrating to America.

“We are looking at extensive storm damage because of extreme climate, we’re looking at drought in an area in a region where agriculture is one of the most traditionally important basis for their economy,” said Harris. “We’re looking at what’s happening in terms of food scarcity as a result of that and in fact, incredible food insecurity, which we used to call hunger food insecurity.”