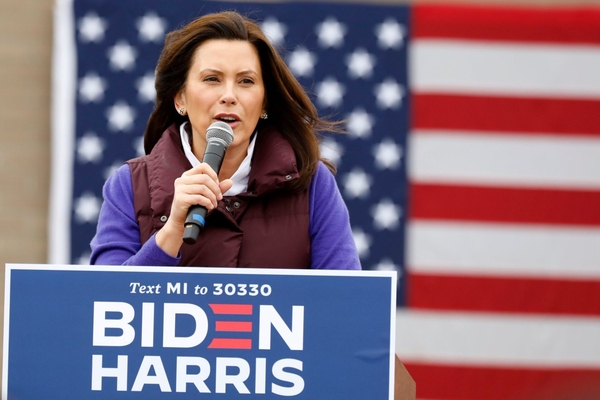 (foxnews) – Michigan Gov. Gretchen Whitmer lied about not traveling out of state in a podcast interview last week, saying she was “here in town the whole time.”

Whitmer admitted earlier this week that she traveled to Florida in March, despite cautioning Michigan residents against traveling out of state.

Last week, Whitmer joined the Michigan publication MIRS on their podcast, where she was asked by reporter Kyle Melinn if she was able to take any days off for spring break or over the past year amid the COVID-19 pandemic.

Whitmer, a Democrat, responded that she was “here in town the whole time” during spring break and that the last trip she had taken “was to Israel” on official business.

Ted Goodman, the communications director for the Michigan Republican Party, blasted Whitmer for her travels, saying the problem wasn’t that the governor visited her dad but rather “that she lied about it.”

“The issue is not that Gov. Whitmer visited her father, it’s that she lied about it and continues to hide key facts,” said Goodman. “It’s also hypocritical as Michiganders were denied the same opportunity through her rules that locked people from visiting their loved ones in hospitals and nursing homes.”

Whitmer previously responded to criticisms of her travels to the Sunshine State, saying that she was not vacationing in Florida and was checking in on her ill father.

“It is saddening,” Whitmer told The Washington Post Live. “It is a two-day trip. I wasn’t partying in Miami.”

“It was certainly not spring break,” Whitmer added.

Whitmer’s office came under fire recently after it came to light that her state Department of Health and Human Services Director Elizabeth Hertel and Whitmer’s newly minted health director traveled out of state as the governor’s administration warned against it.

The governor has blamed spring breakers returning from states like Florida for the uptick in cases in the Wolverine State. The traveling scandal coincided with the scrutiny over her controversial nursing home policies.

Whitmer’s office did not immediately respond to Fox News’ request for comment.