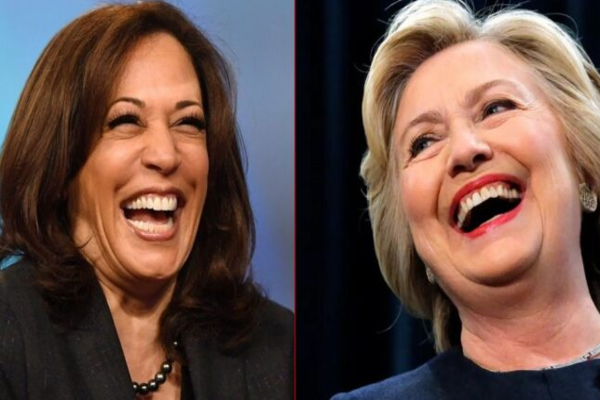 (trendingpolitics) – The White House was handed a much-needed ‘bombshell’ on Wednesday to blow up the narrative that Biden’s presidency is already a failed one.

Then Supreme Court Justice Breyer signaled he would soon retire. The New York Times reported the news, which does not make it a lock; but when it comes to progressive affairs, one can bet the grey lady has it right that the announcement is all-but-a-done-deal.

While Biden is certain to pick a fire-breathing leftist for the forthcoming vacancy, there is another option that would solve a lot of headaches for Team Biden. Be rid of Kamala Harris.

Jen Psaki on Wednesday afternoon confirmed that Biden’s nominee will be a black woman.

The Kamala Harris SCOTUS speculation was off-and-flying on Wednesday afternoon:

Conservative pundits also picked up on the imminent possibility.

York noted that Biden said he looked forward to “making sure there’s a black woman on the Supreme Court” in 2020.

Drew Holden recommended that he do it.

“Biden should tap Harris for SCOTUS,” Holden said. “He’ll get the first woman of color on the bench plus he’ll get to pick a new VP that people actually like.”

“Seeing republicans pushing for Kamala Harris to the SCOTUS and it doesn’t seem like trolling,” she said.

The rumor isn’t new, however. It simmers up out of the bad blood noted between the Harris and Biden camps. Kamala Harris has already seen a number of high-ranking aides quit remaining in her service in her first year.

In November, we reported that Kamala Harris and Joe Biden may be heading towards a bad breakup. The White House power couple have been locked in a bitter feud going back to the 2020 campaign. There were credible reports of behind-the-scenes maneuvering to ‘get Kamala out’ of the vice presidential role.

Fox News’ Chad Pergram, who I know would not repeat idle gossip and would only report Capitol Hill developments with strong corroboration, told Jesse Watters that there are “whispers” suggesting that there may be some new “high profile confirmation hearings” on the horizon in the House of Representatives.

Amidst the leak war between Harris’s team and Biden’s team, Chad Pergram pointed to the conjecture about the uncertain future of Kamala Harris, given such events at the botched introduction at the White House.

Chad Pergram, who is an avid buff of Congressional process and mechanics, disclosed that he received a message from a well-informed insider that told him he should familiarize himself on the process to confirm a “vacancy for the Vice President in the Senate and in the House.”

The mainstream media reacted to the report as Fox News ginning up ‘speculation’ over Kamala Harris’s future. But such reports did not originate with Fox News. After CNN’s admission of the Biden-Harris rift, the Daily Mail reported there was talk of the White House seeking a Supreme Court seat for Harris to get her out of their hair.

“Harris’ approval rating has plunged even further than Biden’s in recent months, with rumors swirling that the president is considering appointing her to the Supreme Court as a backdoor method of selecting a new VP,” the Daily Mail reported.

Kamala Harris’s approval ratings have collapsed to roughly the same abysmal point as Biden’s (CBS/YouGov had them each at a 44 percent approval rating, while 56 percent of respondents disapproved). Her prospects of becoming president have thus faded faster than Biden’s cognitive abilities. The Supreme Court could be her way out… setting the stage for Hillary Clinton.

This smacks of the infamous “straightforward from here” ramblings from leftist commentator Sally Kohn in 2017, but President Clinton seems to now be a possibility.

“President Clinton”? One can only imagine the thoughts spinning around Hillary’s head at the moment. But is this realistic?

First of all, Kamala Harris would need to be confirmed as Supreme Court Justice, prompting her resignation. Given that the Senate knows her all-too-well from her time as Senator and President of the Senate, they may be willing to throw her the SCOTUS seat just to be rid of her.

Next, Hillary Clinton would need to be nominated for vice president and confirmed by both houses of Congress. The 25th Amendment to the Constitution, which was passed in 1967. Section 2 states:

“Whenever there is a vacancy in the office of the Vice President, the President shall nominate a Vice President who shall take office upon confirmation by a majority vote of both Houses of Congress.”

It would be a highly contentious battle to get Hillary Clinton through the gates and into the Oval Office once again. If the Democrats have any intention of doing so, they’d better hurry.

This seems like an unlikely scenario. But if it’s one thing we’ve learned from the Biden presidency thus far: Expect the unexpected.