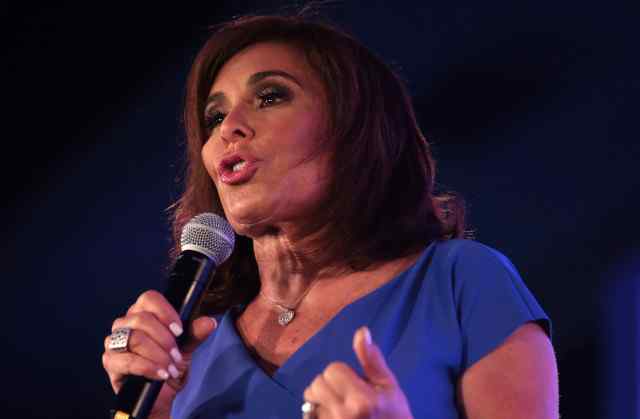 (breitbart) – During her Saturday broadcast, Fox News Channel’s Jeanine Pirro slammed President Joe Biden for his remarks on the Second Amendment and his suggestions about how to proceed with gun policy.

The “Justice” host took issue with him suggesting the right to bear arms was not absolute, and asked him how that compared to other constitutional amendments guaranteeing certain rights.

PIRRO: There are two things citizens everywhere in the world know to be alarmed about if taken away. One is freedom of speech and the second is the right to bear arms.

Joe Biden’s official position on the Second Amendment, the right to bear arms puts us directly in peril of becoming a fascist state.

In his latest effort calling for more gun control, he says firearms purchased at gun shows are exempt from background checks. That is a lie.

His claim that gun manufacturers have immunity from lawsuits is also a lie. But have no worries, according to Joe, nothing impinges upon your right to bear arms.

JOE BIDEN (D), PRESIDENT OF THE UNITED STATES: Nothing, nothing I’m about to recommend in any way impinges on the Second Amendment, but no amendment — no amendment to the Constitution is absolute.

PIRRO: Really? Really? Oh no constitutional amendment is absolute? Where did you hear that one? Or a better question, who made you king? What other amendments are not absolute in your mind? How about the 19th that gives women the power to vote?

If you think that’s not absolute, where would you start chipping away? Maybe conservative women shouldn’t have the right to vote. How about the Fourth Amendment? You must have probable cause before someone is searched or property is seized. Should you eliminate probable cause if the political minority’s property is being seized?

And the Sixth Amendment, the right to a fair trial. Maybe that’s not absolute, too. After all Hawaii Senator Mazie Hirono says all women need to be believed and if that’s the case, we may never have a fair trial again.

How about the Fifth Amendment, Joe? Double jeopardy. Maybe. After a not guilty verdict, you should be able to go for a second time, go for the guilty verdict.

And how about the First Amendment? Maybe that’s not absolute in your mind either, but then again we already know that Big Tech is canceling the free speech of conservatives and in many parts of the country, freedom of religion is not as protected as casinos and other secular institutions.

Mr. President, with all due respect, do you realize that this is the United States of America? We are a nation founded on the Constitution and we are so tired of what’s going on in this country. Your gun grab is the latest in this rich environment where the Hollywood elite Second Amendment is absolute since they have all the protection they want by simply hiring men with guns.

And as for people in Congress, it appears their Second Amendment is absolute, since they are protected by fences and sensors and shoulder to shoulder National Guard, but every day Americans like us are supposed to sit back and say, “I understand, a crazy man may get a gun and therefore I and all other legal gun owners should suffer a loss of our Second Amendment right.”

You know, seven years ago, I said we can’t blame peaceful Muslims for what radical Muslims do any more than we can blame peaceful gun owners for what nut jobs with guns do. I know you have memory issues, Joe, but the Second Amendment has been confirmed by the United States Supreme Court over and over again.

You see mass shootings and you use them as political subterfuge to take away the everyday man’s guns. You don’t have a clue, or maybe you do.

Your overhaul of how guns are bought and sold in the United States doesn’t affect criminals one bit. Criminals and nut jobs are not going through normal channels to buy guns. The criminal gets his guns through illegal channels. He doesn’t show up waiting for an FBI background check.

Chicago has one of the strictest gun laws in the nation and some of the highest gun crime rates in the nation. What does that tell you, Joe? That tells you that gun control is an illusion.

America’s criminals have guns, and at a time when police are being defunded, told to stand down, cops are being demoralized, afraid to even make arrests, do you really expect us to back off our God-given right to defend ourselves?

And just last month, I know you don’t consider it a crisis, but 170,000 people came through our southern border and we don’t have a clue as to who they are or what they’re about. We’ve identified terrorists from Yemen, MS- 13 gang members and immigrants from 141 countries and according to Border Patrol and I actually visited the border that number of 170,000 isn’t half the number of people coming through and believe me, they are not all coming with just cell phones.

We’re talking cartels, drugs, heroin, fentanyl — and you want to chip away at my gun rights now? The way to combat gun crime is to prosecute the criminal and make sure he learns not to commit the crime again. It is to find out where he got the gun. Was there a straw purchaser involved? Was the gun trafficked illegally?

Get an informant. Get a warrant. Squeeze people who have information until you move up the chain until you stop the gun trafficking. This is not rocket science, it is fundamental law enforcement, so stop with the nonsense of putting law-abiding people, gun owners through hoops like dogs at a dog show.

Your bill even allows the FBI to indefinitely delay a firearm sale for simply failing to complete instant checks. Mentally ill individuals should not have access to guns. Mentally unstable individuals or those with drug abuse problems like your son, Hunter, should not be able to get a gun, so why don’t you start working on those problems.

Criminals are not afraid of you, Joe, in fact, they’re laughing at you and the rest of us. Mentally ill individuals should not have access to guns. How are you going to stop that from happening? HIPAA prevents you from getting their medical records, so how are you going to find out if they’re telling the truth?

And by the way, Joe, maybe you ought to look into the individuals like your son, Hunter, who not only lied on his gun application to get a gun, but passed an FBI background check, actually got a gun when everyone knew he was abusing drugs and then when Hunter’s girlfriend, Beau’s widow, threw the gun in a garbage can across the street from a high school because he left it in his truck, I didn’t hear anybody getting into trouble for that.

You’ve got to prosecute crime, Joe, and leave law-abiding gun owners alone. I don’t need your permission to own a gun and I don’t need the permission of anyone in Washington to own a gun. You can’t prevent me from owning a gun, I have the right to have a gun. It’s not only enshrined in the constitution, it is affirmed by the Supreme Court repeatedly, so get off your leftist high horse and stop telling people that the Second Amendment is not absolute and that we need your permission because we don’t. It’s a God-given right, a natural right that we’ve got to defend ourselves and you’ve got nothing to do with it.

So you can keep yapping about gun control, but until you actually take gun crime seriously, as far as gun owners are concerned, it’s nothing more than white noise coming from the White House.