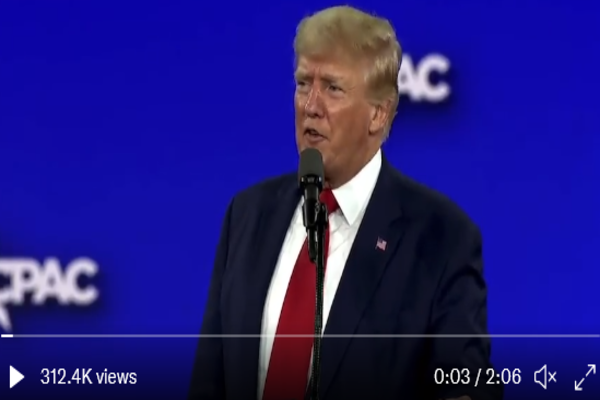 (breitbart) -Former President Donald Trump once again talked about overhauling the administrative state on Saturday, telling a crowd at the Conservative Political Action Conference (CPAC) in Dallas that the next Congress and president need to “remove rogue bureaucrats and root out the deep state.”

As we secure the border, another key priority for the next Congress and the next President will be to drain the swamp once and for all to remove rogue bureaucrats and root out the deep state. Congress should pass groundbreaking reform empowering the president to ensure that any federal employee who is corrupt, incompetent, or unnecessary for the job can be told, “You’re fired.” You ever heard that? You’re fired.

Trump’s comments come after recent reports asserted Trump would use his Schedule F executive order to fire nearly 50,000 government bureaucrats if he returns to the White House in 2024. Trump seemingly confirmed these reports when he referenced the executive order in a recent speech at Turning Point USA’s Student Action Summit last month.

Trump complained that the current process to remove a federal bureaucrat from their post is a lengthy process that takes an average of five years:

Our current appeals process to remove these bureaucrats, people that can really be bad, they can even be thieves. You can catch them stealing large sums of money. You have to go through a three stage appeals process, which takes on average five years per stage. 15 years you’ll be gone; you’ll be out of office by then.

Trump said that the lengthy timeframe dissuades other politicians from starting the bureaucrat removal process because it takes longer than their terms in office.

“In other words, to fire someone who is doing a bad job, if the government wins, will take more than a decade under the current system. Almost all politicians won’t start that process because they’ll be gone and they know it,” Trump said, adding:

You know a lot of politicians, they go into Washington, they’re all set. And then they get caught up with people that say, ‘Hey, I’ll be here a hell of a lot longer than you will,’ and the politician just goes about having nice dinners. We can’t do it anymore. We’ve got to run this country properly, because it’s time to clean house in Washington, D.C., and we did a lot of it but nobody knew that deep state was that deep. We did a lot of it.

Although Trump has hinted at, but not officially announced, a 2024 presidential run, he would have the majority support of Republicans, according to a straw poll conducted at CPAC in Dallas.

Trump won a massive 69 percent of the vote, which was 45 percent higher than the next closest challenger, Florida Gov. Ron DeSantis (R), who received just 24 percent support among CPAC attendees.