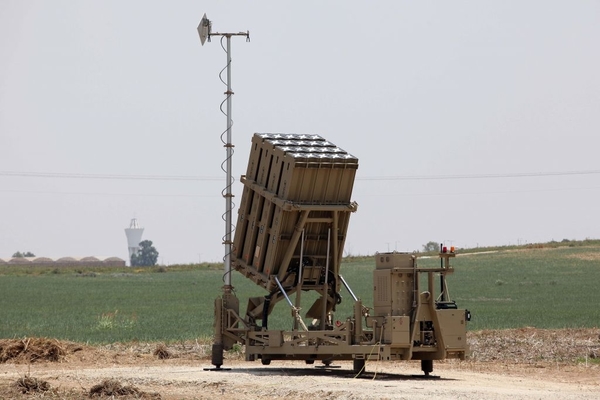 (breitbart) – Israel’s Iron Dome short-range missile defense system was in action Monday night, taking down several rockets fired from Gaza by Palestinian terrorists, part of a barrage of some 150 rockets fired toward civilians in Jerusalem and southern Israel.

Several videos circulating on social media showed residents watching the skies for rockets amid air raid sirens, then seeing the flashes of Iron Dome missiles being fired from batteries, honing in on their targets, and destroying them in mid-flight.

Several rockets — out of over 150 fired — landed in Israel, causing damage, though there were no reports of deaths.

The Iron Dome was developed by Israel’s Rafael Advanced Defense Systems, and deployed with help from U.S. funding. The U.S. military has now bought Iron Dome batteries for use in defending U.S. troops from similar rocket attacks.

Palestinian terror groups launched rockets from Gaza this week amid tensions stoked by Palestinian leaders as the month of Ramadan ended, and just days ahead of the secular anniversary of Israeli independence on May 15, marked by Palestinians as the “Nakba” (catastrophe). Palestinians also rioted in Jerusalem ahead of an anticipated (now postponed) decision by Israel’s Supreme Court about the fate of several homes in the Sheikh Jarrah neighborhood, a decades-old property dispute.

Palestinian rioters used the cover of Islamic holy sites in Jerusalem, and a group of stone-throwing Palestinians attempted to lynch an Israeli driver near the Old City. Israeli police entered the area to restore order, which has been falsely portrayed by Palestinian leaders as an attack on the Al Aqsa Mosque, which Palestinians themselves had been using to launch attacks.

Over 150 rockets were fired at Israel on Monday, according to the Jerusalem Post. Israel launched airstrikes on Gaza, killing 11 members of the Hamas terrorist group, according to the Israeli military, as reported by the Times of Israel; Palestinians claimed that 20 people had been killed, including 9 minors. Hamas is known to use civilians as human shields.

The Biden administration admonished both sides, neglecting the fact that the violence was started and encouraged by Palestinians.

Last month, the Biden administration promised to provide hundreds of millions of dollars in aid to the Palestinians, without any reforms or commitments to negotiate with Israel, in what critics called a violation of U.S. law against funding terror.

Ironically, the violence may have prevented a left-wing coalition from replacing Prime Minister Benjamin Netanyahu, since the opposition parties will need the votes of an Arab party, Ra’am. Ra’am suspended participation in coalition talks Monday.