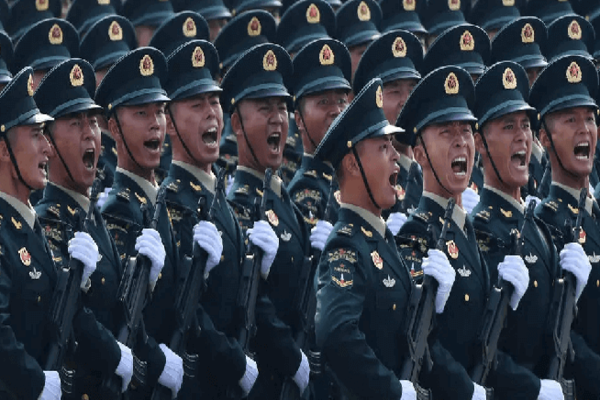 ( breitbart ) – Indian Defense Minister Rajnath Singh testified before the nation’s parliament on Tuesday that China had “mobilized a huge number of Army battalions and armaments” along its border with India recently, fueling mounting clashes between the two nuclear-capable militaries.

Tensions have soared along the India-China border, formally known as the Line of Actual Control (LAC), this summer, peaking with a hand-to-hand melee in June that resulted in dozens of deaths in the Galwan Valley, located in India’s Ladakh region.

Despite Beijing insisting that China did not suffer significant casualties in that exchange, Singh told Parliament that Indian troops “inflicted costs, including casualties, on the Chinese side.”

Retired Indian Army General V.K. Singh estimated at the time that twice the number of Chinese soldiers as their Indian counterparts died in the exchange. China still denies that it incurred any casualties at press time.

Speaking to Parliament, Rajnath Singh warned that, despite diplomats from both countries signing a vague agreement to deescalate tensions last week, China has increased its military presence on the border.

“China has mobilized a huge number of Army battalions and armaments along LAC and inner areas. There are many friction points in eastern Ladakh, Gogra, Kongka La, Pangong Lake’s north and south banks,” Singh said on Tuesday, according to India’s WIO News. “Indian Army has made counter deployments in these areas.”

Singh estimated that Chinese troops were still illegally occupying as much as 14,600 square miles of land in Ladakh.

“China doesn’t recognize the traditional and customary alignment of the boundary. We consider that this alignment is based on well established geographical principals,” Singh warned. “India andChina border issue remains unresolved. Till now, there has been no mutually acceptable solution. China disagrees on the border.”

Singh praised the Indian military for a “timely and appropriate” response to Chinese aggression throughout the summer on the border and asserted that morale was “high” among the nation’s soldiers. He also emphasized that he hoped the two nations could resolve their dispute peacefully and urged Parliament to pass a resolution stating “that we stand shoulder to shoulder with our armed forces who are guarding our borders to safeguard India’s sovereignty and integrity.”

Indian officials say China’s People’s Liberation Army (PLA) troops triggered the fighting in the Galwan Valley by establishing a position on sovereign Indian territory without notifying the Indian government. When approached to explain why they were there, the Chinese reportedly attacked an Indian ranking officer and his unit with rudimentary weapons like rocks, sticks, and barbed wire, resulting in the deaths of at least 20 Indian soldiers and an unknown number of PLA troops.

The Galwan Valley massacre was the deadliest exchange between Indian and Chinese armies in over half a century. In response, India changed longstanding rules of engagement to allow the use of firearms on the border.

This month, Indian forces announced they had established a presence on a mountaintop overlooking Pangong Tso, a lake on the border between Ladakh and Chinese-occupied Tibet, after intercepting a PLA contingent carrying tents and surveillance equipment. New Delhi insisted that the skirmish that led to the India position there was a necessary preemptive measure to prevent another Galwan Valley incident. Chinese Communist Party (CCP) officials angrily protested the move as an invasion of sovereign Chinese territory.

The Pangong Tso dispute resulted in the first shots fired across the India-China border in 45 years, reportedly occurring last week. Indian officials conceded that their soldiers had fired some “warning shots” across the border but claimed that Chinese troops fired first. Beijing denied that PLA troops had fired any shots. Several Indian news outlets later published images of Chinese troops on the LAC that appeared to show them armed with spears, machetes, and rifles.

In an attempt to ease tensions on the border before the harsh Himalayan winter begins, Indian Minister of External Affairs Subrahmanyam Jaishanka and Chinese Foreign Minister Wang Yi met in Moscow last week. The two issued a joint statement with five points of agreement, none of which required concrete action by either side.

“The two Ministers agreed that both sides should take guidance from the series of consensus of the leaders on developing India-China relations, including not allowing differences to become disputes,” the statement read. The two also agreed to “continue their dialogue” and “quickly disengage,” but did not define what troop disengagement on the border would look like. The diplomats also agreed to continue “confidence-building measures.”

As of Monday, unnamed sources reported to several Indian media outlets that the situation along the LAC is neither better nor worse than it was before the ministers met.

“Sources also said both the Indian and Chinese troops are firmly holding onto their respective positions at the Line of Actual Control (LAC). And while the situation in the region continues to be tense, no fresh movement of Chinese troops was witnessed,” WION reported.