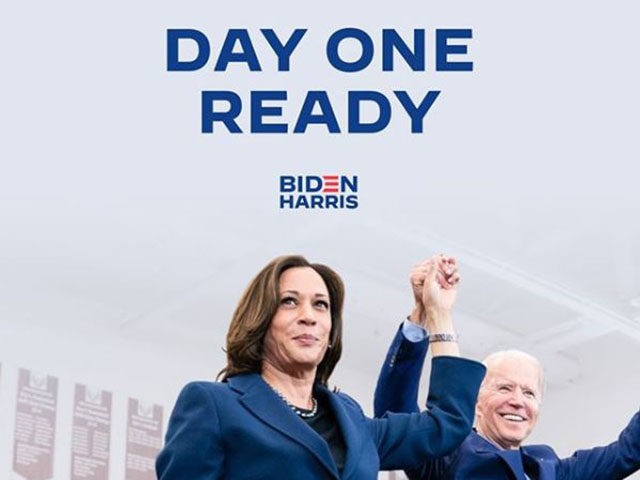 (breitbart) – Joe Biden (D) positioned his running mate, Sen. Kamala Harris (D-CA), front and center in an Instagram post reading “Day One Ready” as questions continue to mount over his mental fitness and ability to effectively act as commander-in-chief.

“Day One Ready,” reads the Instagram photo posted to Biden’s feed this week. The photo features Harris front and center as Biden holds her hand triumphantly in the background.

“Come January, there won’t be any time to waste repairing the damage of the last four years and beginning the work of building back better,” he said. “@KamalaHarris and I are ready to get to work on day one”:

Biden used similar language last week, telling his 8.6 million Twitter followers that he selected the California lawmaker because she is “ready to lead on day one”:

Biden’s repeated admission — that he selected Harris due to her ability to lead right out of the gate — continues to feed the mounting concerns over his mental fitness, particularly as his odd behaviors and mental flubs appear more frequently as he slowly reemerges to the spotlight following weeks in his basement. His campaign has, largely, used the coronavirus pandemic as a justification for the former vice president’s absence from public events.

A Rasmussen poll released last week added credence to the widespread narrative on Biden’s mental fitness. Fifty-nine percent of voters indicated that it is, on some level, “likely” that Biden’s running mate will take over the presidency within his first term. Even 49 percent of Democrats expressed the same belief.

Nonetheless, Jill Biden has vehemently rejected the concerns regarding her husband’s cognitive abilities, dismissing the critiques as “ridiculous.”

“I mean, Joe’s on the phone every single minute of the day talking to governors who are calling him and Nancy Pelosi,” she told NBC’s Today on Wednesday.

“He’s on the Zoom. He’s doing fundraisers. He’s doing briefings. I mean, he doesn’t stop from 9:00 in the morning until 11:00 at night. So that, you know, that’s ridiculous,” the former second lady added.