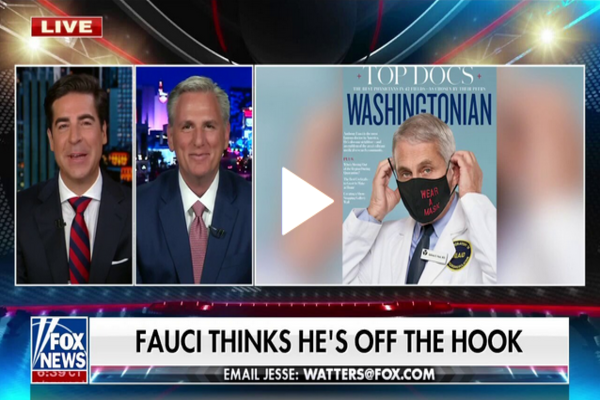 (breitbart) – Tuesday, during an appearance on FNC’s “Jesse Watters Primetime,” House Minority Leader Kevin McCarthy (R-CA) suggested more resignations along the lines of that of National Institute of Allergy and Infectious Diseases director Dr. Anthony Fauci were to come as it becomes more apparent Republicans will at least control the House of Representatives after the November midterms.

McCarthy said Fauci and others could leave the Biden administration to avoid being called before GOP-led congressional committees demanding accountability.

“I imagine [Fauci] will comply,” McCarthy said. “What will be interesting is how many more in the administration will resign before we come to power in January, the Homeland Security secretary or others? The Democrats have been deceiving the American public, so Republicans are going to demand accountability. I remember being in the Situation Room when President Trump was in office, COVID had just hit, and Dr. Fauci told me nobody should be wearing a mask.”

“It actually could cause you to get COVID because of the humidity created around it,” he continued. “Then he went from wearing a mask to two masks and others. I just have one rule of thumb. I really don’t trust anyone who keeps a mural of themselves in their office. Those types of individuals should have to come and answer questions.”