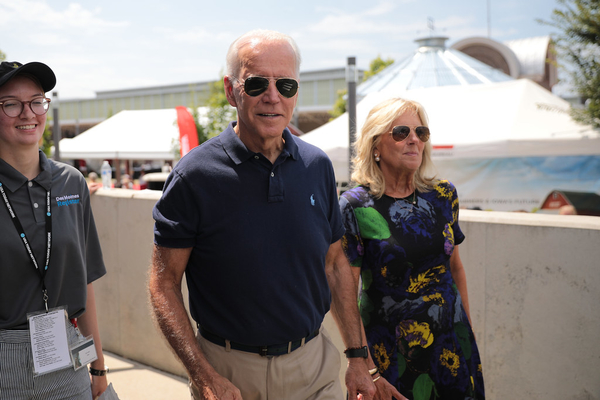 (breitbart) – Dr. Jill Biden’s first husband spoke up this week publicly for the first time in decades, announcing he is voting for President Donald Trump instead of his ex-wife’s husband, Democrat Joe Biden.

In the interview with Inside Edition, Bill Stevenson—the owner of the Delaware nightclub the Stone Balloon and Jill Biden’s first husband—claims the story that Joe and Jill tell about how they met is a lie.

“I was betrayed by the Bidens. Joe was my friend. Jill was my wife,” Stevenson said in the interview with Inside Edition.

Joe and Jill Biden claim they were set up on a blind date in March 1975, a few years after Joe’s first wife, Neilia Biden, died in a fatal car crash that also claimed their daughter’s life. Joe and Neilia’s sons, Hunter and Beau Biden, survived the fatal car accident, which happened in December 1972 right after Joe was first elected to the United States Senate. Joe was sworn into the Senate from the hospital where his sons were recovering. Beau Biden would later become the attorney general of Delaware, but he has since passed away due to brain cancer. Hunter Biden, meanwhile, has had his share of problems over the years with drugs and relationships but also has drawn scrutiny over various financial relationships he developed with foreign powers like the Chinese Communist Party and business dealings in Ukraine.

As the story goes, as the Bidens have told it time and again in campaign rallies and books and again most recently at the Democrat National Convention, a few years after Neilia’s death he saw a picture of Jill—a model—on an advertisement in Delaware in March 1975. The next day, Joe claims his brother Frank—who has also been drawn into corruption concerns surrounding the Biden family—introduced Joe and Jill Biden since Frank knew Jill from college.

“The Bidens’ love story reads like a classic fairytale,” Inside Edition’s Steven Fabian said in the news package rolling out the Stevenson interview. “They saw a movie together on that blind date, fell in love, and never looked back. But Jill Biden’s ex-husband says there’s much more to the story, claiming Jill and Joe’s relationship actually started in 1974 when he was still married to Jill.”

Fabian asked Stevenson if the Bidens’ story of how they met is true.

“It was a blind date. Point blank, is that story true?” Fabian asked Stevenson.

“No, not even a little bit,” Stevenson replied.

Stevenson married Jill when she was 18, six months after they first met on the beach.

“Jill and I met on the beach in Ocean City, New Jersey, in August of 1969. Sure I fell in love with her because I married her six months later,” he said in the interview.

Despite the official 1975 blind date narrative, Fabian said that Stevenson claims he introduced the two of them years earlier—and they knew each other well.

AD
“According to Bill Stevenson, both he and Jill first got to know Joe Biden when Biden was a county councilman in New Castle, Delaware. Stevenson asked for his help in obtaining a liquor license,” Fabian said in the news package.

Asked if he and Jill were friends with Joe Biden, Stevenson told Inside Edition’s Fabian that “oh yeah” and “not only that, I threw a fundraiser for him in August and raised between $2,500 and $3,000. We got married in ’70. I introduced Joe to Jill in ’72. Right before the election in ’72, Jill, Joe, Neilia, and I were in his kitchen. How do you forget that?”

Fabian said that “that would be three years before that now-famous blind date.”

“Stevenson said his first inkling something was up was when Jill refused to go with him to meet Bruce Springsteen, who was booked to appear at the Stone Balloon,” Fabian said.

“She said ‘Joe asked me to keep an eye on the boys.’” Stevenson said. “I just thought in the back of my mind, ‘Hmmm.’”

“Then one day a man came into his bar and asked him to pay damages for a fender bender that involved Jill,” Fabian said.

“Did you confront Jill at the time and say, ‘What’s going on here?’” Fabian asked.

“Yes I did,” Stevenson replied. “She didn’t say anything. She just looked at me. I said, ‘You gotta go. You gotta go get your own place.’”

Jill Biden and Bill Stevenson were formally divorced in May of 1975. Stevenson, who Fabian noted later was convicted on federal fraud charges and sentenced to six years of probation for passing bad checks, blamed politics for the legal issues. He said the divorce from Jill “became contentious” in Fabian’s telling of it when she tried to get a stake in the Stone Balloon.

“He has just written a book about his life and is considering publishing it,” Fabian noted.

Fabian also asked Stevenson why he waited until now to tell this story.

“We’re talking about decades and decades ago. This story comes out right before the election; a lot of people are going to ask some questions,” Fabian asked.

“It’s years ago, but guess what? It’s so current right now because he is picking on people about character,” Stevenson replied.

Stevenson also denied that any Republican Party or Trump campaign officials reached out to him to get him to go public with his story.

The Bidens are denying Stevenson’s account, for what it’s worth.

“These claims are fictitious, seemingly to sell and promote a book,” Jill Biden’s spokesperson said according to Inside Edition. “The relationship of Joe and Jill Biden is well documented. Jill Biden separated from her first husband irreconcilably in the fall of 1974 and moved out of their marital home. Joe and Jill Biden had their first date in March of 1975 and they married in June of 1977.”

At the end of the interview package, Inside Edition’s anchor wrapped the segment by noting that Stevenson said he voted for Barack Obama and Biden twice in 2008 and 2012 but will be voting for Trump this year because of “Trump’s stance on police issues.”