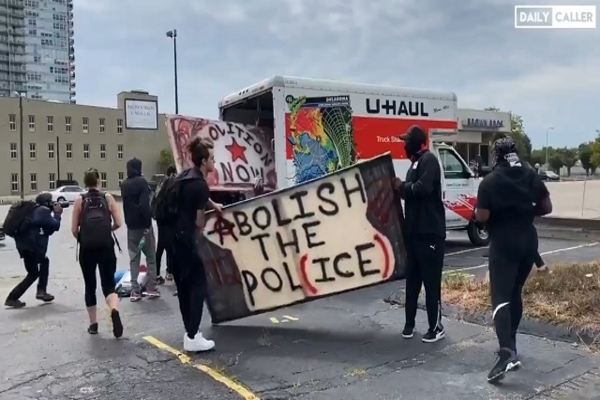 (informationliberation) – Just days after FBI Director Chris Wray claimed under sworn testimony before congress that Antifa was an “ideology” and not an “organization” video out of Louisville, Kentucky showed a U-Haul truck pulling up and delivering shields, “abolish the police” signs and other supplies to a mob of Black Lives Matter “protesters” who went on to stage a riot.

It’s clear as day this is a very organized group:

The truck was reportedly rented to Holly Zoller of the Louisville Bail Project.

The mob proceeded to threaten police, telling a group of officers to “get ready to f***ing die!”

Another protester was seen carrying an AK-47.

Remember folks, according to the heads of the FBI and DHS the real organized threat is “white supremacy!”

As President Trump said at a rally last week, Antifa “is not an ideology — it’s a bunch of thugs and anarchists that are being funded by somebody and find out who the somebody is.”