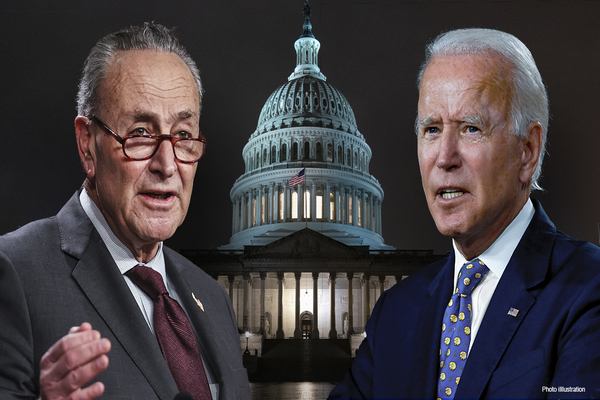 Schumer held a press conference on Monday joined by Sen. Elizabeth Warren (D-MA) and Sen. Bob Menendez (D-NJ). Schumer spoke about some of the provisions added to the partisan $1.9 trillion relief bill passed in early March and canceled student debt.

The New York Democrat mentioned the Justice Department is already conducting a legal review on whether Biden has the authority to issue an executive order on blanket forgiveness of student debt.

Schumer told reporters on the press call, “I think it’ll be much harder to do legislatively. We have not seen our Republican colleagues jump at this opportunity,” when discussing the lack of support from Republicans.

Menendez added, “Why wait for legislation?”

According to CNBC, if done by executive action, it could wipe out up to $1.7 trillion in debt owed by U.S. student loan borrowers would stimulate the economy.

Adding, “Today would be a great day for President Biden and Vice President Harris to Cancel Student Debt.”

Warren also told reporters Monday, “President Biden has an opportunity to fix that with a stroke of a pen,” she told reporters. “This bill helps pave the way to cancel $50,000 in student loan debt.”

In February, during a CNN townhall, Biden said, “I will not make that happen,” referring to canceling $50,000 in student loan debt.

“I do think in this moment of economic pain and strain that we should be eliminating interest on the debts that are accumulating,” Biden said. “I’m prepared to write off $10,000 but not $50,000.”

Jen Psaki, the White House press secretary, has continuously said, “the President has and continues to support canceling $10,000 of federal student loan debt per person as a response to the Covid crisis.”

In January, Biden directed the Department of Education to extend the suspension of federal student loan payments and interest until October 1st.