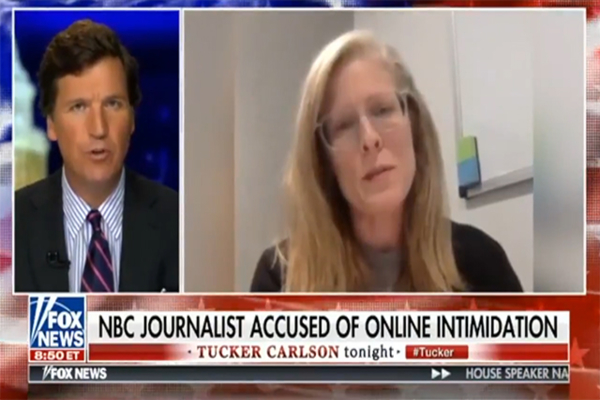 (informationliberation) – The Blue Cheka journos who work to dox dissidents and get them censored on behalf of our corrupt ruling class threw a fit Thursday on Twitter after one of their own, NBC smear-merchant Brandy Zadrozny, was exposed on Tucker Carlson Tonight.

Folks came out of the woodwork to tell their stories about Zadrozny ruining their lives:

NBC News, CNN’s resident pro-censorship activist and doxer Oliver Darcy and many others threw a fit in response.

NBC News, showing they have no standards whatsoever, said she “represents the best of investigative journalism and of NBC News.”

“Fox News has chosen to smear Brandy,” they said. “In so doing they have shamefully encouraged harassment and worse.”

If that’s the case, what has Brandy’s “journalism” encouraged?

Remember folks, when the media doxes you, gets you censored on social media and runs cover for antifa carrying out terrorism against you it’s “the best of investigative journalism” but when you simply report on what they’re doing you’re “harassing” them and potentially putting their lives in danger!