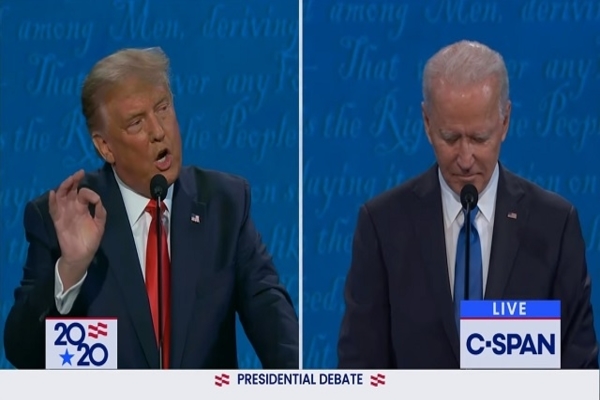 This was the first screenshot I took randomly:

Biden is 77 years old and turns 78 in November. If elected, he will be the oldest president in US history. He’s not going to make it four years, meaning Kamala Harris will be our president. Harris’ entire career was built off sleeping with Mayor Willie Brown.

Throughout the debate, Biden was stuttering, bumbling and very weak. It seemed like after 30 or so minutes whatever drugs they put him on started to wear off and he started hanging his head down and hanging his mouth open.

It reminded me of when a boxer starts slouching in later rounds after getting pummeled and has trouble keeping their guard up.

Fortunately for him, moderator Kristen Welker kept stepping in to help him out. She reportedly cut Trump off 41 times and only cut Biden off 8 times.

It was amazing how Welker would cut Trump off in the middle of his statement, then Biden would interject and she would just let him ramble uninterrupted for over a minute.

The most emotion Biden could show was anger, but he comes across as extra angry because of his botched facelift.

Welker’s questions were terrible. Half the debate was spent whining about the hoax of systemic racism.

That said, Trump had many killer lines.

The debate opened (again) with COVID as Democrats think it hurts Trump.

Biden fearmongered like crazy while Trump gave a message of hope.

Biden hilariously said 200,000 people are going to die before the end of the year if we don’t all wear masks.

Trump responded saying: “We can’t lock ourselves up in a basement like Joe does. He has the ability to lock himself up. I don’t know, he has obviously made a lot of money some place. But he has this thing about living in a basement.”

The most memorable line of the night was, “Who built the cages, Joe?”

The answer, of course, was Obama. The Twitterati spawned that hoax and the media ran with it only to find out the viral pictures of the “kids in cages” were from 2014 under Obama (when the media couldn’t care less).

Trump correctly noted how the “kids” were brought with cartels, gangs and coyotes and said he got rid of catch-and-release.

Biden said he’s planning to give amnesty to “over 11 million” illegal aliens because, “We owe them — we owe them!”

We don’t owe them anything, Schmoe. They owe us for allowing them into the country and allowing them to collect hundreds of thousands in welfare handouts that our people paid for through blood, sweat and tears.

Biden totally botched his line about the Proud Boys, referring to them instead as the “Poor Boys.”

After Trump hammered Biden on he and Hunter’s shady deals with Ukraine and China, Biden hilariously claimed the laptop was a Russkie plot.

Biden cited the comically stupid story of some 50 former intelligence officials including corrupt ex-CIA head John Brennan claiming they think the laptop has the “hallmarks” of a Russkie plot.

They admit in their propaganda piece they have no special knowledge linking Russia to anything and provided no additional evidence.

Neither Joe Biden or Hunter have denied the laptop is his. All the evidence points to it being his but the media refuses to confront him on it. The fact he refused to address it tonight is noteworthy in itself and further proof the emails are all legit.

Trump got Biden to admit he wants to “transition away” from the oil industry and cut all their federal subsides.

Biden also comically said the feds don’t give subsidies to solar and wind and Trump called him on it immediately.

What Democrats are doing to this man is elder abuse. They’ve got him pumped up on drugs and running for president when he should be at home safely ensconced in his basement enjoying the millions he and Hunter Biden looted!

Trump had a tough four years as a result of endless, criminal deep state witch hunts but he has remarkably managed to overcome the adversity and has been hitting his stride in just the past two months.

The polls are tightening and he appears to be peaking as we speak!

It feels a lot like 2016 is happening all over again!