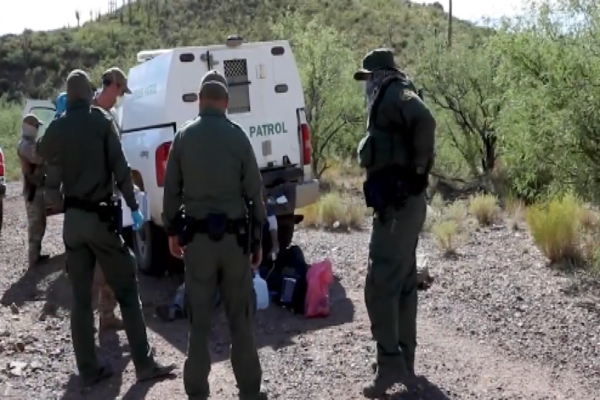 (bigleaguepolitics) – On Christmas Eve, Border Patrol agents at the Rio Grande Valley arrested a Salvadoran national who was previously deported for having a criminal rap sheet in the U.S.

According to Bob Price of Breitbart News, the Salvadoran man tried to sneak into Texas. The man was convicted by an Illinois court for sexual assault against a child.

Rio Grande City Station Border Patrol agents working around the vicinity of Roma,Texas found a man trying to illegally make his way across the river from Mexico into the United States. Border Patrol agents then took the migrant into custody and placed him in a processing area.

In accordance to processing protocols, illegal aliens who are caught must go through a medical screening and criminal background investigation prior to being sent to Mexico according to the Title 42 Wuhan virus protection protocols the Centers for Disease Control and Prevention established. Border Patrol officials told Breitbart Texas that roughly 90 percent of migrants who are caught illegally entering the country are sent across the border within two hours of their apprehension.

After conducting a biometric background investigation, the border authorities were able to identify the man as a Salvadoran national with a criminal record in the U.S. According to criminal database records, the man is 48-year-old Mario Rivera-Perez. The Salvadoran national was convicted in a Chicago court for Sexual Assault of a Child. Illinois sex offender records revealed that his victim was an 11-year-old child. A report from Patch revealed that the incident involved Rivera-Perez inappropriately touching the little girl at a store in northwest Chicago.

Furthermore, Border Patrol agents highlighted that Rivera-Perez had a seperate DUI conviction, while the Plaines, Illinois, Sheriff’s Department has an active warrant on him.

Thankfully, this pervert is being deported. However, individuals such as Rivera-Perez will likely be allowed to stay under incoming President Joe Biden’s immigration policies. Biden specifically wants to implement a moratorium on deportations for the first 100 days of his presidency, potentially letting thousands of criminal aliens run loose across the U.S.

Such a move would be music to the ears of freaks such as Rivera-Perez and could potentially contribute to a notable crime wave. On January 20, 2021, America will likely be in for a rude awakening. That’s what happens when a population falls for the Siren Song of globalism.