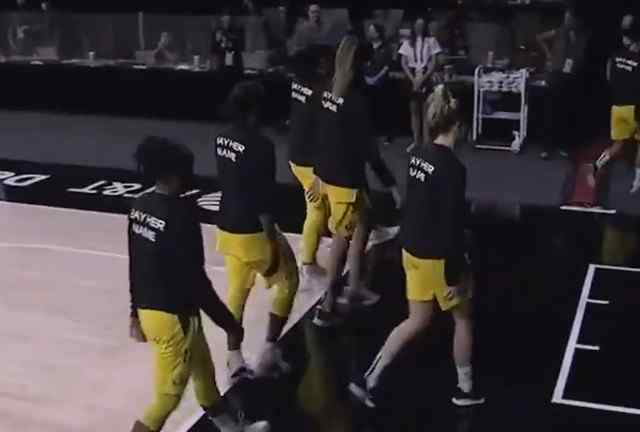 (Breitbart) – The Seattle Storm and New York Liberty, walked off the court during the playing of the national anthem prior to their game on Saturday.

In addition, there was a 26-second moment of silence in honor of 26-year-old Breonna Taylor who was shot and killed by Louisville police.

As the national anthem was played, the @nyliberty and @seattlestorm walked off the floor as part of the social justice initiative. pic.twitter.com/VihH5X3Yzh

Each player also wore Taylor’s name on the back of their jerseys.

“We are dedicating this season to Breonna Taylor, an outstanding EMT who was murdered over 130 days ago in her home,” Liberty player Layshia Clarendon announced before tip-off. “Breonna Taylor was dedicated and committed to uplifting everyone around here. We are also dedicating this season to ‘Say Her Name” campaign, a campaign committed to saying the names and fighting for justice of black women – black women are so often forgotten in this fight for justice, who don’t have people marching in the streets for them. We will say her name. Sandra Bland. Atatiana Jefferson. Dominique Remy Fells. Breonna Taylor. We will be a voice for the voiceless.”

The protest was not unexpected, though, this is the first time players have actual walked off the court/field of play. With the exception of one player, Giants relief pitcher Sam Coonrod, he New York Yankees, Washington Nationals, San Francisco Giants, and Los Angeles Dodgers, all knelt prior to the playing of the national anthem on Opening Day.

Coonrod cited his faith, and the Marxist leanings of BLM, as his reasons for refusing to kneel.