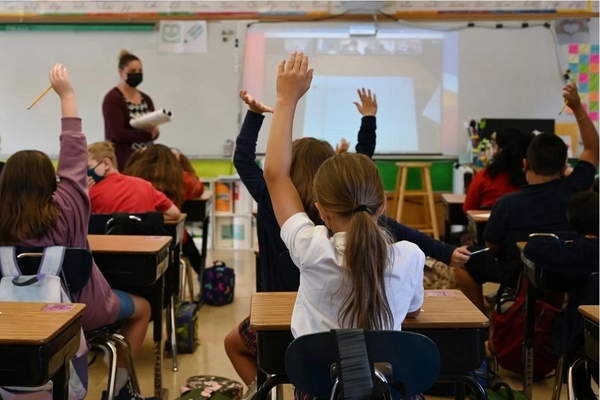 (breitbart) – Some schools in California are using social justice tactics to try to repair the damage done to school-age children over the past almost two years of coronavirus lockdowns and remote learning.

That includes the Los Angeles Unified, Oakland Unified, Sacramento City Unified, San Diego Unified and other districts are phasing out grades below a C for high school students.

The plan is meant to “re-engage” students but also help them get accepted into public colleges.

“Our hope is that students begin to see school as a place of learning, where they can take risks and learn from mistakes, instead of a place of compliance,” Nidya Baez, assistant principal at Fremont High in Oakland Unified, said in a ABC report. “Right now, we have a system where we give a million points for a million pieces of paper that students turn in, without much attention to what they’re actually learning.”

ABC reported on the development:

If a student fails a test or doesn’t complete their homework, they’ll be able to retake the test and get more time to turn in assignments. The idea is to encourage students to learn the course material and not be derailed by a low grade that could potentially disqualify them from admission to the University of California and California State University. Students who don’t learn the material, pass the final exam or finish homework by the end of the semester would earn an “incomplete.”

Although education reform advocates have been pushing for this for years, the pandemic offered an opportunity for districts to put it into action. With so many students languishing academically after a year of distance learning, districts see dropping D’s and F’s as a way to help students who had been most impacted by the pandemic, especially Black, Latino and low-income students.

But the move is also, potentially, a step toward an entirely different learning system, in which students are assessed by what they’ve learned, not how well they perform on tests on a given day or whether they turn in their homework on time. Known as competency — or mastery-based learning — the style has been a staple of some private and charter schools for years, and a goal for education reformers trying to overhaul the traditional high school system.

Some educational officials have praised the idea.

“We need a system that gets beyond the institutional model and provides more meaningful feedback for students,” Devin Vodicka, former superintendent of Vista Unified in San Diego County and chief executive of the Learner-Centered Collaborative, said. “The future is going to require less focus on time and more focus on what we can do and contribute, and the quality of our performance. We need to prepare our students for this.”

“But for some teachers, Ds and Fs play an important role in the classroom,” NBC reported. “They signal that a student did not learn the material and needs extra help. Dropping Ds and Fs doesn’t guarantee that students will learn the material, even with extra help, and may lead to grade inflation, said Debora Rinehart, a math and science teacher at St. Theresa School, a Catholic school in Oakland.”

“I will work with any student before or after school or even on the weekend to help them learn. However, I will never lie about their knowledge level,” she said. “Not reporting Ds and Fs is the equivalent of lying about a student’s progress.”

“Graduating with a D, in career and technology courses, too, leaves students with few choices,” she said. “No one is saying water down grades. This is about giving support, not lowering standards, and looking for simple ways to make grading more fair, to give kids a fighting chance and to measure what students know with multiple opportunities to show that.”