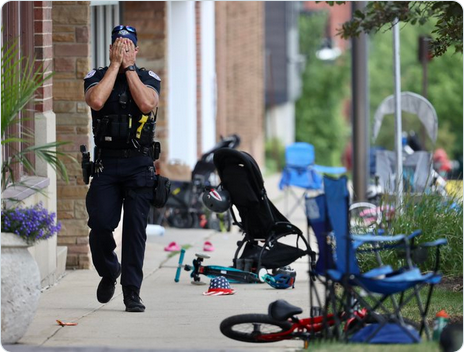 (breitbart) – Multiple people have been killed after shots were fired along the Fourth of July parade route in Chicago’s Highland Park neighborhood.

5:59 PM — A doctor who treated victims on scene says of the slain parade attendees: “Their bodies were blown up.”

5:56 PM — At the latest law enforcement press conference, authorities name a 22-year-old person of interest who is “armed and dangerous” and is believed to be driving a silver Honda with Illinois plates.

5:29 PM — Some info on the wounded from local hospitals:

5:07 PM — Government official says one victim of the shooting is a Mexican national. An automatic translation reads: “Unfortunately, we have confirmed a person of Mexican nationality who died from a gunshot wound in Highland Park, IL. Our sincere condolences to all the people who lost their lives in this attack. Also, there are two wounded of Mexican origin.”

4:23 PM — New video appears to show a moment when the suspect reloads and continues firing, as attendees realize an assault is happening:

4:21 PM — Illinois Lt. Gov. Juliana Stratton: “There are too many guns on our streets.”

4:07 PM — Nearby areas are canceling Independence Day events and urging residents to shelter in place:

3:06 PM — Highland Park is one local jurisdiction that at least previously banned “assault weapons” and magazines with more than ten rounds of ammunition. The U.S. Supreme Court rejected a challenge to the law in 2015. Breitbart’s Ken Klukowski wrote at the time:

The city of Highland Park is part of the greater Chicago area and has a long track record of opposing citizens exercising the Second Amendment’s right to keep and bear arms. Part of this is banning “assault weapons,” which is a term invented by politicians.

2:54 PM — Illinois Governor J.B. Pritzker calls for gun control: “prayers alone will not put a stop to the terror of rampant gun violence in our country.”

2:43 PM — State Senator Julie Morrison, whose family was in attendance, becomes an early voice calling for gun control in response to the attack.

The Chicago Sun-Times reported that the parade began around 10 a.m. but was suddenly halted 10 minutes later after shots were fired.

2:32 PM — New video of the moment shots were first fired:

2:13 PM — Chicago Sun-Times columnist shares graphic photo of blood and bodies on the ground, plus video of parade attendees fleeing:

2:05 PM — Six people are confirmed dead and 24 more hospitalized. Police give a description of the suspect and say a rifle was found at the scene:

ABC 7 notes that “the parade was stopped about 10 minutes after it kicked off at 10 a.m.,” when the sound of gunfire rang out.

Police told parade attendees, “Everybody disperse, please. It is not safe to be here.”

Chairs, blankets, and baby strollers were left behind as people scrambled for cover.

The Sun-Times notes that 5 people were killed and 16 wounded in the incident.

Newsmax correspondent Alex Salvi tweeted, “There are reportedly multiple fatalities following a shooting at an Independence Day parade in Highland Park, Illinois.” He went on to write, “Warning: Gunshots heard in below video”:

Breitbart News pointed out that at least 54 people were shot Friday into Monday morning in Chicago. Seven of the shooting victims succumbed to their wounds.