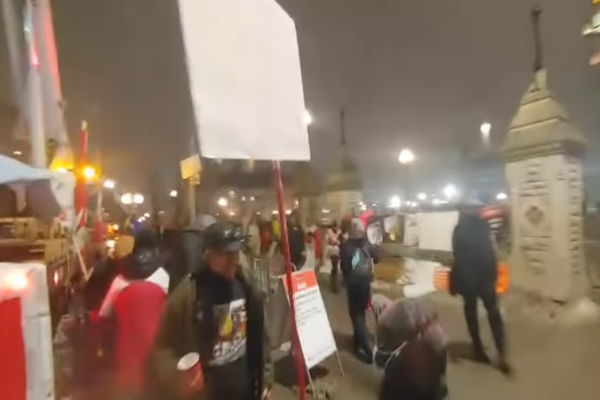 (breitbart) – OTTAWA, Canada — “It’s nothing but smiles, good vibes, support, love, appreciation, resistance, and freedom thoughts,” Dave from Montreal told me on Wednesday with a slight Quebecois accent, describing the ongoing protests against Chinese coronavirus mandates in the nation’s capital.

Dave traveled to Canada’s capital to help support truckers and other protesters in front of Parliament Hill, pairing up with an elderly lady to sustain the rally’s participants with coffee, hot chocolate, assorted protein bars, soups, sandwiches, and whatever else others donated.

Truckers began organizing convoys from Western Canada the week prior in opposition to the federal government’s decree that “unvaccinated” Canadian truck drivers re-entering the country by land subject themselves to a 14-day “quarantine.” “Unvaccinated” foreign truckers are now denied entry to Canada.

The atmosphere of the protest on Saturday in downtown Ottawa was cheerful, happy, and infectious. Despite daytime temperatures around -20 Celsius (about -4ºF), Canadians coming together in opposition to human rights violations in the name of “public health” were upbeat.

Thousands of people were present on and around Parliament Hill on Wednesday, many flashing big smiles beaming from bare faces. The protesters contrasted starkly with the grim scenes of masked government employees scuttling about the area on a normal weekday.

Anti-social distancing was replaced by social closeness. The sea of persons on Wellington Street resembled the thickness of people normally seen on Canada Day, not unlike a busy nightclub or concert in terms of density. Thousands of people were within inches of one another. Walking past someone smoking a cigarette was nerve-wracking when wearing a pricey and bulky winter jacket.

Canadians have a global reputation of being too conciliatory, Dave reflected. He told me, “We’ve been known worldwide to be too sorry for stuff, and I’m tired of being sorry.”

I asked Shanna, who lives near Ottawa and had been to the demonstrations daily since Saturday, to address derisions of protesting Canadians from those in news media and politics.

She replied, “Just come down. Come down any day – even on the weekends or on a weekday – look around. You’ll for sure see Canada here. Everybody is here in unity, and there’s all love. I’ve been down here five days trying to find this ‘hate.’ I can’t find it.” Robert Kraychik / Breitbart News

The uplifting energy was inescapable. Canadian flags were everywhere. Patriotism was in the air.

I could not resist asking Daz, another demonstrator, to remark on news media narratives framing the Freedom Convoy as motivated by “white supremacy” given his dark skin.

Prime Minister Justin Trudeau has repeatedly disparaged Canadians opposed to his policies as a “fringe minority” of “anti-vaxxer mobs” who engage in “racist, misogynistic attacks.” He impugned the intelligence of those rejecting vaccinations, saying they are “very often misogynistic and racist.”

“White supremacy, as a whole, is a red herring,” Daz declared. “They always mention ‘white supremacy’ … I’m not going to fall for these kinds of narratives. If you see me, do I look like a ‘white supremacist?’”

Daz explained his reasons for demonstrating. “I’m here to support the Freedom Convoy 2022 because I believe in the message,” he stated. “I believe that freedom of speech, freedom of expression, freedom of religion, [and] freedom of assembly should be respected. Those are the three fundamental [and] sovereign rights that we have as human beings living in Canada, whether you are jabbed or unjabbed, and the government has totally stepped on those rights.”

Mark and Mike — from Manitoba and Alberta, respectively — spoke about freedom as their rationale for driving hundreds of kilometers to Ottawa.

“If we don’t defend our freedoms now, our kids will have no freedom to fight for later,” Mark warned. Mike said he was “fed up” and that Canadians “want to be heard.”

Those demonstrating in opposition to the reworking of society in the name of the Chinese coronavirus pandemic, the prime minister added, are unworthy of listening to.

“I have also chosen to not go anywhere near protests that have expressed hateful rhetoric, violence towards fellow citizens, and a disrespect – not just of science – but of the frontline health workers,” Trudeau declared.

News media warnings of the threat of “violence” at the Freedom Convoy never came to pass. Ottawa Chief of Police Peter Sloly said on Monday, “Let me repeat, no injuries, no deaths, no riots in the last four days in the nation’s capital, despite the fact that we have a global cause, a national protest tens of thousands of individuals, from a wide variety of causes, who’ve gathered to actively demonstrate 24 hours a day,” he said.