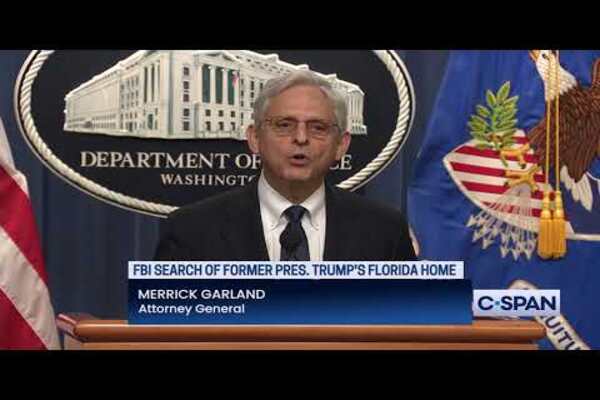 While the establishment media suggested “classified documents relating to nuclear weapons were among the items the FBI” sought in the raid of Mar-a-Lago, it took weeks for Garland to make up his mind on whether to approve the warrant, the Wall Street Journal reported Tuesday.

“The decision had been the subject of weeks of meetings between senior Justice Department and FBI officials, the people said,” the Journal reported. “The warrant allowed agents last Monday to seize classified information and other presidential material from Mar-a-Lago.”

After the raid and significant public pressure, the Justice Department filed a motion in court to release the FBI’s property receipt of the 28 inventory items federal agents seized. Magistrate Judge Bruce Reinhart agreed to make the search warrant public the next day.

On Monday, Donald Trump said the FBI “stole” his “passports” in last week’s raid. The passports were not independently itemized on the FBI’s property receipt of the 28 inventory items federal agents seized.

The warrant, signed by Reinhart and approved by Garland, did not state that they could take Trump’s passport. Typically, the government needs a separate court order to seize someone’s passport, even temporarily.

CBS News’s Norah O’Donnell contradicted Trump’s statement and claimed that “[a]ccording to a DOJ official, the FBI is NOT in possession of former President Trump’s passports.”

After the report, Trump’s team released an email from Jay Bratt, the top counterintelligence official in the Justice Department’s national security division, which confirmed Trump’s passports were seized in the raid of Mar-a-Lago the previous Monday. The email also said the passports would be returned to the Trump “at 2 PM today.”

According to the Wall Street Journal, “The department Monday asked a judge not to make public the affidavit on which the search warrant was based, as some news-media outlets had sought, writing in a court filing that the document contains ‘critically important investigative facts’ about witnesses and tactics.”

Prosecutors explained they do not want the affidavit made public because it would “likely chill future cooperation by witnesses whose assistance may be sought as this investigation progresses,” they wrote.