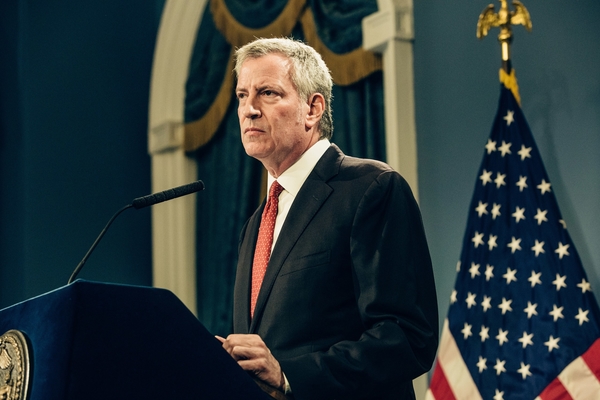 (breitbart) – New York City Mayor Bill de Blasio (D) on Thursday said he is “not having second thoughts” about mandating vaccines for first responders and other city workers ahead of Friday’s 5 p.m. deadline. He predicted many will get vaccinated anyway “once they really realize that they’re not going to get paid.”

When asked about the likelihood of shortages of city workers Monday — from sanitation workers to first responders — the Democrat mayor made it clear he has no regrets.

“But no. I am not having second thoughts. We expected that a lot of the vaccinations would happen toward the end of the deadline. We also know a lot of people make the decision once they really realize that they’re not going to get paid. That’s just a human reality,” he said, calling the contingency planning “exceptional” but failing to provide specific details outside of the fact that agencies talked with all the commissioners “in detail” and “feel very confident.”

A ripped “My Body My Choice” sign is seen as people to protest against NYC’s coronavirus (COVID-19) vaccine mandate that went into effect today for public school employees on October 04, 2021 in New York City. ( Michael M. Santiago/Getty Images)

“They’re smart, agile leaders. We’re going to make this work and it’s going to make everyone safer ultimately,” he said, pointing to the pattern seen with the vaccine mandate on healthcare workers and school employees. He said thousands have gotten vaccines since the deadline passed and stressed there is “no discussion” of changing Friday’s deadline.

“The bottom line is can we do the things we need to do first of all to keep this city safe for the long run. Well, that means getting people vaccinated. Yes we can do that. Yes we have a plan to do that,” he said:

And then can we keep all the other services moving in a way that protects New Yorkers. Yes. I’ve asked this question exhaustively of the commissioners people have tremendous respect for the answer is yes yes yes. There’s confidence we can make it work, and we’re moving forward go ahead.

The remainder of city employees, including members of NYPD and FDNY, have until 5 p.m. to show proof of at least one shot. Those who fail to do so will be placed on unpaid leave.

His remarks follow thousands of workers marching across the Brooklyn Bridge on Monday in protest of the vaccine mandates.