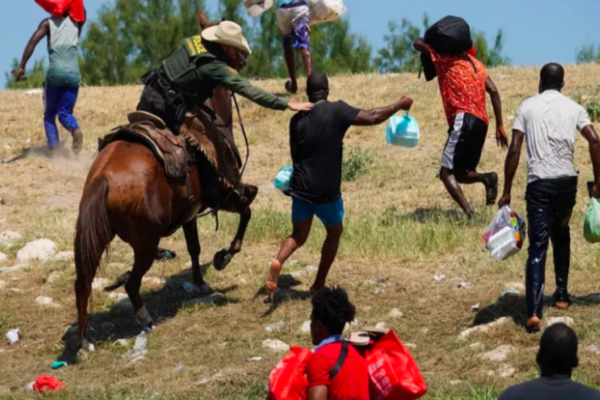 Biden had promised that CBP agents would “pay” after progressives expressed outrage over a video of a mounted officer arresting illegal immigrants crossing the Rio Grande River in Del Rio, Texas. Mainstream media and Democrats had spread false allegations accusing the CBP agent of whipping a Haitian migrant, while in reality the agent was merely holding the reins of a horse.

“President Biden reappeared today, after the chaos that he and his administration created and that had been taking place for more than a week, and what does he do? He miraculously takes a question from the press and proceeds to take “responsibility” for the chaos he caused by blaming the Border Patrol agents who were left to clean up the mess his administration created. Not only that, but he lied about it.

Biden had no qualms about further inflaming dangerous racial tensions by repeating the drumbeat of propaganda that he must know is all based on lies, deception, and the usual hysteria dialed up by radical activists and far left politicians. Even the photographer who took the photos in question, Paul Ratje, has come to the defense of our agents, stating publicly that he and his colleagues never saw the agents whip anyone.

The Border Patrol agents on the Horse Patrol did their jobs, followed their training, and will be exonerated by a fair and impartial investigation. But why even have an investigation? President Biden, Vice President Harris, and DHS Secretary Mayorkas have already passed judgement on the agents, their families who depend on them, their livelihood, and their careers by stating, “I promise you those people will pay.” In other words, no investigation is necessary.

We are disgusted by President Biden’s words today. This is not leadership, but pure intimidation.