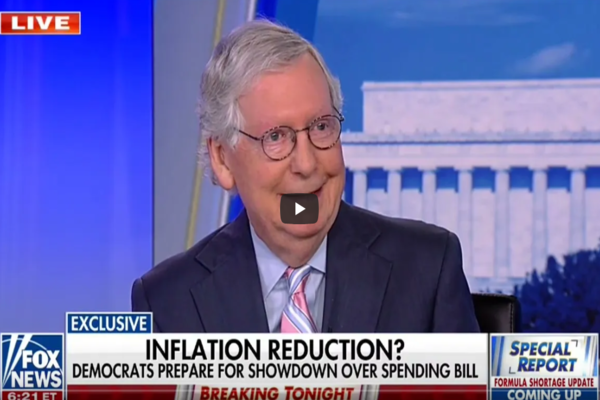 (breitbart) – Wednesday, during an appearance on FNC’s “Special Report,” Senate Minority Leader Mitch McConnell (R-KY) predicted with confidence he would be reelected as Republican leader of the U.S. Senate, regardless if his party wins the majority or remains in the minority after the November midterm elections.

McConnell told “Special Report” anchor Bret Baier that challengers could “have at it.”

BAIER: Senator, you’re losing some of your most trusted lieutenants. Rob Portman, Pat Toomey Richard Burr. You could be looking, as I mentioned, J.D. Vance, Mehmet Oz, Ted Budd.

You have Trump-loyal Republicans like Eric Schmitt, who just won in Missouri, Blake Masters in Arizona. And some of those candidates have refused to say on the trail that they would back you as leader.

Is that the new face of a Trumpified Republican Party? And are you the guy to lead that in the Senate?

Well, look at it this way. I have been elected eight times without opposition. If I have an opponent, I don’t own this job. And there’s always an election every two years for leader. If anybody wants to challenge me, have at it.

BAIER: If you don’t win the majority, are you still going to be leader?