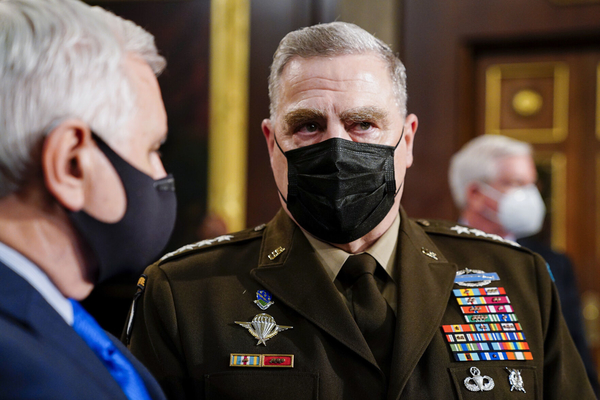 According to Peril by Bob Woodward and Robert Costa, Milley was worried that after the January 6 Capitol breach, Trump could “go rogue” and called a secret meeting on January 8 with senior military leaders.

During that meeting, Milley instructed senior military officials in charge of the National Military Command Center to not take orders from anyone unless he was involved, according to a write-up of the book by CNN.

“Milley considered it an oath,” Woodward and Costa wrote.

The book also revealed that Milley had two back-channel phone calls with China’s top general to reassure him that the U.S. would not attack, even promising to give him a heads up if it did.

According to a write-up by the Washington Post, Milley — four days before the 2020 presidential election — assured his Chinese counterpart, Gen. Li Zuocheng of the People’s Liberation Army, that the U.S. would not strike.

The book said Milley’s first call was prompted by intelligence that suggested the Chinese believed the U.S. was preparing to attack.

“General Li, I want to assure you that the American government is stable and everything is going to be okay,” Milley allegedly said. “We are not going to attack or conduct any kinetic operations against you.”

Milley even pledged to alert Li in the event of a U.S. attack.

“General Li, you and I have known each other for now five years. If we’re going to attack, I’m going to call you ahead of time. It’s not going to be a surprise,” he said, according to the book.

In his second call on January 8, 2021, Milley promised Li, “We are 100 percent steady. Everything’s fine. But democracy can be sloppy sometimes.” Milley did not tell Trump about the call, according to the book.

Also according to the book, Milley told House Speaker Nancy Pelosi “I agree with you on everything,” after the speaker called him and pressed him to secure the country’s nuclear weapons and called Trump “crazy.”

Woodward and Costa write that after the call with Pelosi, Milley “decided he had to act” and told the military service chiefs and then-CIA director to watch everything “all the time.”

WASHINGTON, DC – JUNE 10: Chairman of the Joint Chiefs of Staff Gen. Mark Milley speaks during a hearing with the Senate Armed Services Committee on Capitol Hill on June 10, 2021 in Washington, DC. The hearing was held to discuss the Defense Department’s Fiscal Year 2022 budget proposal. (Photo by Anna Moneymaker/Getty Images)

They wrote, “Milley was overseeing the mobilization of America’s national security state without the knowledge of the American people or the rest of the world.”

“Some might contend that Milley had overstepped his authority and taken extraordinary power for himself,” they wrote, but said the chairman believed his actions were “a good faith precaution to ensure there was no historic rupture in the international order, no accidental war with China or others, and no use of nuclear weapons” as Milley “felt no absolute certainty that the military could control or trust Trump.”

Milley also allegedly discovered Trump had signed a military order to withdraw all troops from Afghanistan by January 15, 2021, and considered it an “end run” around the president’s military advisers.