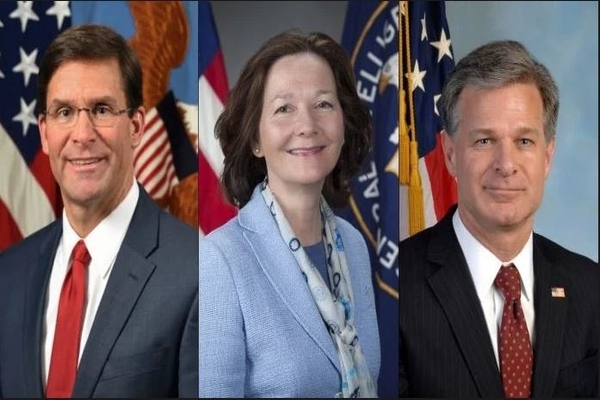 (nationalistreview) – According To Axios, The President Has A List Of Names On Their Way Out The Door If He Retains The Oval Office:
FBI Director Christopher Wray, CIA Director Gina Haspel, and Defense Secretary Mark Esper won’t be around long to see what the next four years have in store should President Trump win his reelection campaign in November. The incumbent plans to replace the three, according to sources who spoke to Axios.

While we’re reluctant to report on unnamed sources from less reliable outlets, these firings make sense for a number of reasons and Axios makes a strong case. Additionally, none of Trump’s supporters will be sorry to see these people go. Gina Haspel, for her part, was instrumental in blocking the release of classified information that the Trump Administration believed would be critical in making their case in the Durham Report.

Axios claims that Haspel plans to leave the CIA regardless of whether President Trump wins or loses in November.

As for Director Wray, his testimony in front of Congress that there has not been widespread voter fraud and his failure to investigate Hunter Biden’s alleged connections to China has irked the administration and hampered their ability to make the case to the American public.

And Esper, who attempted to stonewall the president’s efforts to use the military to quell the race riots over the summer, is widely understood to have fallen out of the president’s good graces.