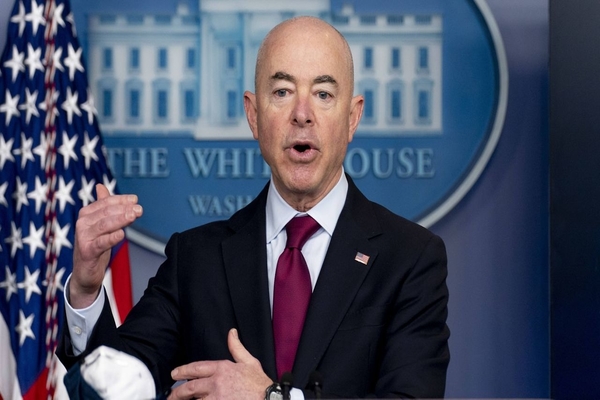 On Friday, during a press conference in El Paso, Texas, alongside Harris, Mayorkas said he was “hopeful” that an amnesty for illegal aliens would be approved by Congress.

“I am hopeful that Congress will pass immigration reform to fix a system that everyone recognizes is broke and I am thankful for [Sen. Dick Durbin’s] years-long effort and championing this effort,” Mayorkas said.

Mayorkas also suggested that the role of DHS, under his and President Joe Biden’s direction, is “to build safe and legal pathways for people” to stay in the U.S. indefinitely — a stark contrast to former President Trump’s DHS, which sought to stem illegal immigration and drug trafficking.

The amnesty push by Mayorkas comes as Sen. John Cornyn (R-TX) has said he is crafting amnesty legislation that would be sent off to Senate Democrats for negotiating.

Together, the two plans would give amnesty to about 2.1 million illegal aliens working on U.S. farms and another 4.4 million Deferred Action for Childhood Arrivals (DACA)-enrolled and eligible illegal aliens and those with Temporary Protected Status (TPS).

Already, many Senate Democrats are seeking to slip an amnesty past Congress through a little-known “reconciliation” maneuver. Senate Budget Committee Chairman Bernie Sanders (I-VT) is crafting a proposal that would include forcing American taxpayers to spend $150 billion on providing amnesty to millions of illegal aliens.

An amnesty would come as nearly 16 million remain jobless, all of whom want full-time jobs. Another 5.3 million Americans are underemployed but likewise, want full-time employment.

An analysis released this week by the Center for Immigration Studies revealed that amnesty for illegal aliens, which would immediately flood the U.S. labor market with millions of newly legalized foreign workers for whom employers can legally hire, would have a devastating impact on the nation’s ongoing unemployment problem.

Every year, 1.2 million legal immigrants are given green cards to permanently resettle in the U.S. In addition, 1.4 million foreign nationals are given visas to take American jobs while hundreds of thousands of illegal aliens enter the U.S. annually.