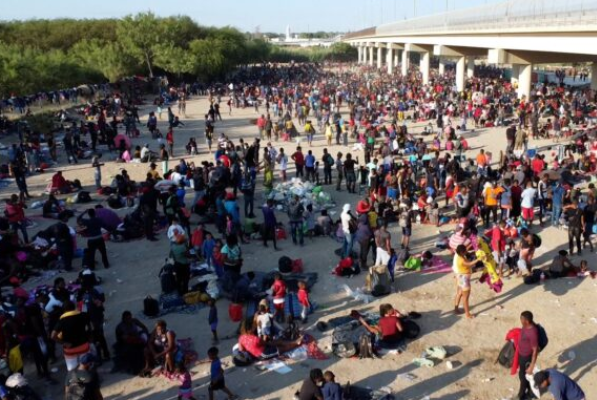 (bigleaguepolitics) – The Department of Homeland Security announced it would formally cancel contracts to build President Donald Trump’s ‘big, beautiful’ wall on the southern border, specifically in South Texas, in an announcement on Friday.

The federal government had previously been paying as much as $5 million a day to contractors, with Biden issuing an executive order cancelling new wall construction without terminating the contracts the day he ascended to the presidential throne.

Cancellation of wall construction comes at the very moment that massive migrant caravans continue the largest continuous assault on the southern border, with almost ten thousand Haitian illegal immigrants already provided the gift of US residency after assailing the border at Del Rio International Bridge in Texas. Migration experts have warned of massive caravans of as many as 60,000 illegal migrants traveling to the United States, emboldened by Biden’s staunch support of an ‘America Last’ border and immigration policy.

The wall, derided by partisan-slop liberals as a joke, proved to have considerable national security value, with CBP personnel and border experts indicating it is indeed effective at deterring illegal immigration and forcing border infiltrators to target condensed areas that are easier for law enforcement to patrol. Almost 600 miles of border wall was constructed during Donald Trump’s reign on the presidential throne, much of it in dangerous areas previously protected with only crude barriers easy for drug and human smugglers to bypass.

It’s probably not a coincidence that walls endure as one of the most frequent human constructions in the history of mankind, with great civilizations ranging from Ancient Rome to China and Persia utilizing them to keep outsiders from infiltrating their borders. Biden’s abandonment of an American wall serves as no less than an invitation to hundreds of millions of potential illegal immigrants to attack the nation’s borders, with the Democrat President already having broken the single-year record for illegal immigration.