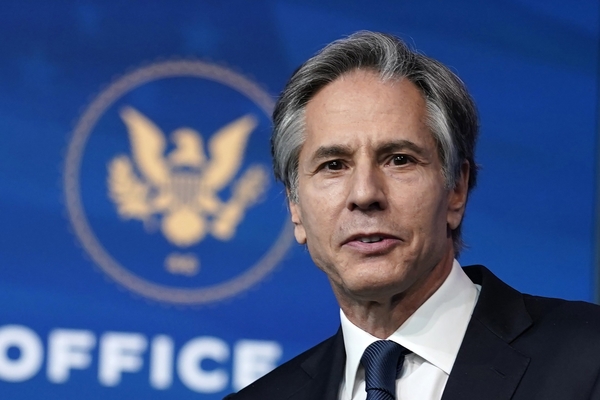 (breitbart) – U.S. Secretary of State Antony Blinken admitted reading an internal cable from about two dozen diplomats warning of the potential swift Taliban takeover of Afghanistan as U.S. troops were pulling out in mid-July, about a month before the jihadi group forced the collapse of the country’s government and military Sunday.

The group of U.S. diplomats reportedly sent the confidential cable, signed on July 13, through a so-called dissent channel and offered recommendations on ways to deal with the situation and accelerate an evacuation.

CNN learned from two unnamed State Department officials that “the diplomats decided to send the dissent memo because they felt previous warnings and recommendations they had made were being ignored and labeled alarmist.”

Blinken admitted reading the internal cable cautioning Kabul could fall when he and Gen. Mike Milley, the nation’s highest-ranking military officer, were briefing lawmakers Friday about the post-Taliban takeover chaos engulfing the country.

In response to Rep. Lee Zeldin (R-NY) asking, “when he read the dissent cable that said the Taliban would take over Afghanistan quicker, Blinken said he read it in mid-July,” Punch Bowl News Founder Jake Sherman wrote on Twitter.

Nevertheless, even after reading the cable, the secretary continued to assure the public that the fall of Afghanistan after the full departure of U.S.-led NATO troops expected to be completed by the end of August was a far-fetched notion. The U.S. military’s withdrawal was moving ahead of schedule as the Taliban carried out an aggressive offensive to seize territory from the Afghan government, with more than 90 percent of it completed by the time the jihadis entered Kabul and declared victory.

Blinken’s optimistic assessments about the potential outcome of the withdrawal proved to be consistently wrong, Breitbart News acknowledged early this week.

The secretary insisted that the collapse of Kabul was unlikely, even as warnings from U.S. intelligence agents, including from his department, became ever more pessimistic – as the Afghan security forces that the American government had spent tens of billions and years to train and equip were unable to stop – the Taliban from quickly seizing territory in recent months.

Echoing President Joe Biden, Blinken denied that the U.S. intelligence community had assessed that Kabul would likely collapse last Sunday, the day the Taliban takeover culminated with the jihadis sweeping into the Afghan capital, the seat of the country’s government.

“[The U.S. intelligence community] did not reach that conclusion,” Blinken told CNN Sunday, insisting even after the terrorist group declared victory and the government collapsed that “the likelihood there’s going to be the Taliban overrunning everything and owning the whole country is highly unlikely.”

“The likelihood there’s going to be the Taliban overrunning everything and owning the whole country is highly unlikely,” Biden said.

White House officials have refused to confirm whether Biden was aware of the U.S. intelligence community’s predictions about the potential fall of the Afghan government.

However, it is now clear that State Department intelligence agents and diplomats warned Blinken of Kabul’s potential collapse at least a month in advance after it became a reality, but the top diplomat chose to keep saying Afghanistan’s fall was unlikely.

In the wake of the Taliban takeover, news reports surfaced about the U.S. intelligence community’s warnings in recent weeks about the potential swift fall of Kabul to the Taliban as the terrorist group conquered province after province.

[A] C.I.A. report in July noted that the [Afghan] security forces and central government had lost control of the roads leading into Kabul and assessed that the viability of the central government was in serious jeopardy. Other reports by the State Department’s intelligence and research division also noted the failure of Afghan forces to fight the Taliban and suggested that the deteriorating security conditions could lead to the collapse of the government, according to [unnamed] government officials.

As the Taliban began seizing provinces across Afghanistan in recent weeks, the CIA’s intelligence assessments began to warn in increasingly stark terms about the potential for a rapid, total collapse of the Afghan military and government, current and former U.S. officials told NBC News.

In the end, the CIA’s description of what a worst-case scenario could look like “was pretty close to what happened,” one former official briefed on the matter said.