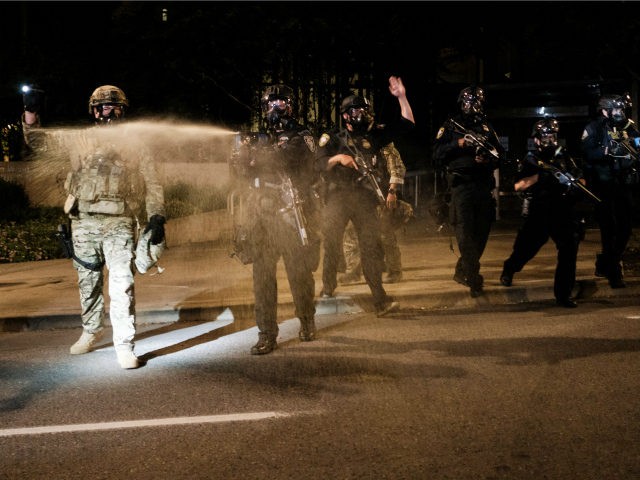 The DOJ spokeswoman made the announcement on Monday, providing the number of federal arrests and charged cases “related to violent opportunists & civil unrest.”

There have been 74 arrests in Portland alone, with 60 demonstrators facing charges. Nationwide, federal authorities have made 236 arrests, with 238 defendants charged:

According to the DHS spokesperson, protesters have been equipped with “Molotov cocktails, Sledgehammers, Pipe bombs, Mortar fireworks, and Metal spikes”:

The Portland Police Bureau has affirmed many of the tools listed, writing as recently as July 26 that downtown protesters were equipped with “gas masks, carried shields, hockey sticks, leaf blowers, flags, and umbrellas specifically to thwart police in crowd dispersal or attempt to conceal criminal acts.”

Violent protests have continued.to ravage Portland, as countless videos show demonstrators vandalizing the federal courthouse, launching mortars toward the building, setting fires in the area, and targeting officers. Rioters reportedly hurled Molotov cocktails toward federal officers over the weekend as they moved to disperse the violent crowds.

“As federal officers left the courthouse to respond to attacks on the fence last night, just like on other nights, rioters responded with hard projectiles, mortar style fireworks and lasers that can cause permanent blindness,” the DHS’s July 27 readout detailing the chaos in Portland read.

The readout affirmed that a Molotov cocktail “was thrown over the fence” shortly after midnight:

Portland Police have been relatively hands-off in quelling the unrest following the addition of federal agents and the City Council’s move to bar the department from assisting federal law enforcement.

Protesters, however, have continued to assault authorities, hurling various projectiles night after night and shining lasers into the eyes of officers.

“You’ve seen the green lasers that are being used out there. We have three officers who currently have eye injuries, and they may not recover sight in those eyes from those laser attacks,” Federal Protective Service (FPS) Deputy Director of Operations Richard announced last week.

Meanwhile, Portland Mayor Ted Wheeler (D) is joining several Democrat mayors in calling for the removal of federal agents from their respective cities.

“At the direction of the President of the United States, unidentified federal agents have been deployed to America’s cities, like Washington, D.C., Seattle, Washington, and Portland, Oregon, to interrupt local protests and impose ‘law and order’ for political purposes,” the mayors said in a joint statement to Congress, accusing Trump of “targeting and occupation of progressive cities” and calling it “unacceptable, un-American, and unconstitutional.”