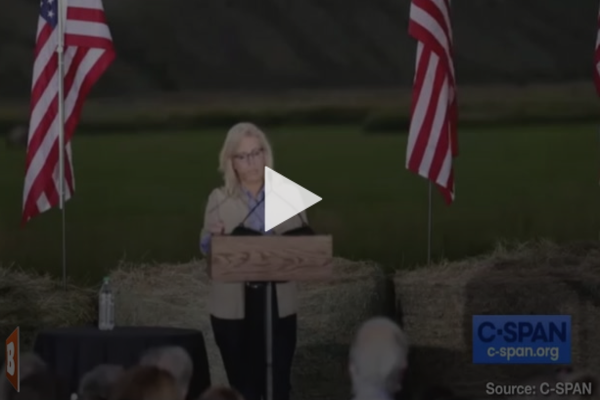 Cheney claimed she lost her primary election only because she failed to “go along with President Trump’s lie about the 2020 election.”

“It would have required that I enable his ongoing efforts to unravel our democratic system and attack the foundations of our republic. That is a path I could not and would not take,” Cheney said.

Cheney said her opposition to former President Donald Trump was rooted in “the principles” that members of congress are sworn to protect and that she “well understood the potential political consequences” of opposing Trump.

She then compared herself to Lincoln, who saved the nation during our Civil War.

“The great original champion of our party, Abraham Lincoln, was defeated in elections for the Senate and the house before he won the most important election of all,” Cheney said. “Lincoln ultimately prevailed. He saved our union and he defined our obligation as Americans for all of history.”

She also quoted Lincoln’s famous Gettysburg Address and claimed that Americans’ “highest duty” is to “protect the foundations of this constitutional republic.”

After comparing herself to Lincoln, Cheney focused on the January 6 Capitol Riots and claimed that “America will never be the same” if Americans do not “hold those responsible to account.”

“At the heart of the attack on January 6, is a willingness to embrace dangerous conspiracies that attack the very core premise of our nation,” she said.

“Our nation is barreling once again toward crisis, lawlessness and violence,” Cheney added. “No American should support election deniers at any position of genuine responsibility, where their refusal to follow the rule of law will corrupt our future.”

She also claimed that Trump is promoting an “insidious lie” about the recent FBI raid of his Mar-a-Lago residence, which will “provoke violence and threats of violence.”

“Trump knows that voicing these conspiracies will provoke violence and threats of violence,” Cheney said. “This happened on January 6, it is now happening again. It is entirely foreseeable that the violence will escalate further, yet he and others continue, purposely, to feed the danger.”

Cheney mentioned Lincoln once more and opined that Civil War-era fighters like Lincoln and former President Ulysses S. Grant are “speaking to us down the generations.”

“Lincoln and Grant and all who fought in our nation’s tragic civil war, including my own great-great-grandfathers, saved our union, their courage saved freedom,” Cheney said. “And if you listen closely, they’re speaking to us down the generations. We must not idly squander what so many have fought and died for.”

In conclusion, Cheney pledged to “do whatever it takes” to prevent Trump from regaining control of the presidency.

“We must be very clear-eyed about the threat we face and about what is required to defeat it. I have said since January 6, that I will do whatever it takes to ensure Donald Trump is never again anywhere near the Oval Office,” Cheney said.

“I ask you tonight to join me as we leave here, let us resolve that we will stand together, Republicans, Democrats and independents against those who will destroy our republic,” Cheney concluded. “They are angry and they are determined. But they have not seen anything like the power of Americans United in defense of our Constitution and committed to the cause of freedom.”