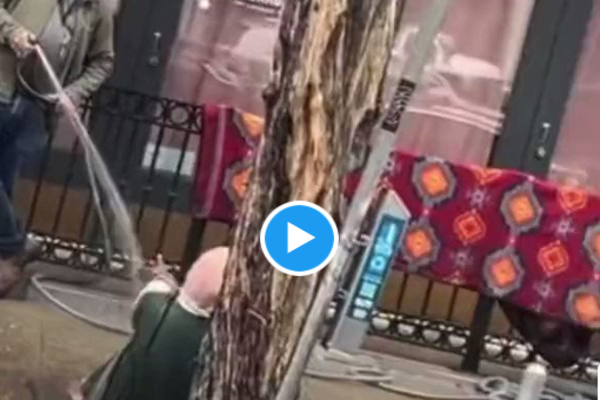 (breitbart) – A San Francisco art gallery owner was caught on video spraying a homeless woman with a garden hose on the street in front of his storefront because she would not move down the street — and she was later hospitalized.

In an interview Tuesday with The Chronicle, Collier Gwin — the owner of Foster Gwin Gallery on Montgomery Street in the posh Jackson Square neighborhood — acknowledged spraying a homeless woman with water after an encounter in which, he said, she turned over garbage cans outside his gallery and refused to move.

“I said you have to move; I cannot clean the street; move down,” said Gwin, describing the confrontation late Monday morning with a woman he later identified as “Cora.” “She starts screaming belligerent things, spitting, yelling at me…. At that point she was so out of control…. I spray her with the hose and say move, move. I will help you.”

A chef from a nearby bakery documented the confrontation and posted the footage online shortly thereafter. By midafternoon Tuesday, the video had drawn 10.7 million views on Twitter and been shared thousands of times. It shocked and rankled many observers, some of whom described the action depicted as “horrific” and “disgusting.” The owners of Barbarossa Lounge, a business clearly identifiable in the video, released a statement denouncing Gwin’s behavior and deeming it “inhumane.”

The woman, who was actually known as “Q,” was later hospitalized, the Chronicle reported, and its glass door had been smashed.

Debate raged online about whether the man was justified:

San Francisco has suffered an exodus of businesses due to crime, open-air drug use, the growth of a large homeless population, and the availability of work-from-home options for many workers in the tech industry.

Last year, the Wall Street Journal reported, office attendance in the city was down 52% from what it had been prior to the coronavirus pandemic, and the downtown area felt deserted at midday due to office vacancies.