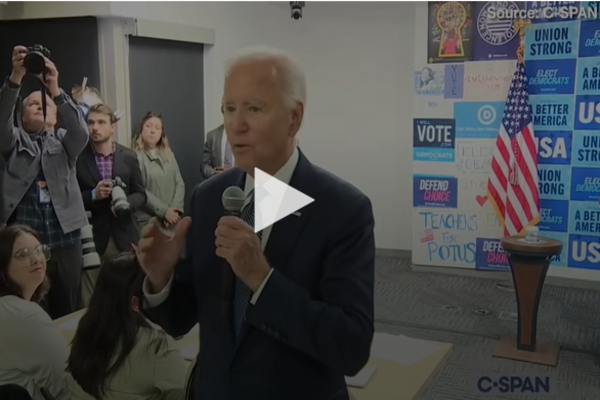 (breitbart) – President Joe Biden struggled to complete his thoughts during a campaign speech at the Democrat National Committee headquarters in Washington, DC, on Monday.

“So far we’re running against the tide and we’re beating the tide,” he boasted about Democrat prospects in the midterm elections after taking the podium. The president denied recent polling showing that Republicans were leading the polls.

“Now the polls have been all over the place. If you speak to most pollsters they’re not sure anymore. Not about the outcome, but about polling,” he said. Later in his speech, the president grabbed a handheld microphone and walked away from his notes at the podium and began talking about several topics at once without completing his sentences.

“We have to remember who we are for God’s sake, we are the United States of America, there’s nothing, nothing, nothing behind our capacity if we put our mind to it. Not a joke,” he began before wandering away from the podium.

The president recalled a meeting with Chinese President Xi Jinping before urgently repeating that “possibilities” is what defines the United States.

“It’s the reason why we’re sort of viewed as the ugly Americans, we believe anything is possible when we do it together, not a joke, think about it,” Biden said in a hoarse whisper.

The president continued rambling about the importance of diversity, and overcoming a crisis, and the future of America’s next generation.

“If I could wave a wand, I’d cure cancer. Why? Because no one believes we can be done but we’re starting to do it,” he said, admitting to the people in the room that “everybody thought he was nuts.”

Biden continued speaking using his rhetorical crutch phrases, including, “I give you my word as a Biden” and “not a joke” and “y’all think I’m kidding, but I’m not.”

The president also appeared to forget his usual speech conclusion asking for God to bless America and protect our troops.

Biden addressed concerns about his age in a recent interview with MSNBC’s Jonathan Capehart.

“I think it’s a legitimate thing to be concerned about anyone’s age, including mine. That’s totally legitimate,” he said. “But I think the best way to make the judgment is to, you know, watch me. Am I slowing up? Do I have the same pace?”

At another point in the interview, Biden paused and blinked heavily as he tried to answer a question, prompting some observers to wonder if he nodded off or fell asleep.