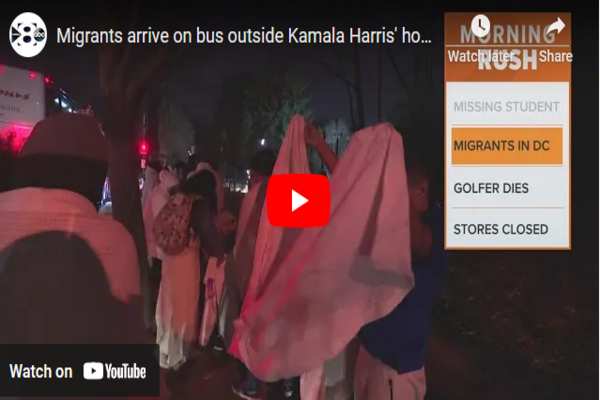 After the roughly 130 border crossers arrived at Harris’s residence, they were picked up by a local aid group and taken to a nearby church.

In response, elected Democrats like Rep. Joaquin Castro (D-TX) called Abbott “worthless” and a “POS,” the acronym for the term “piece of shit” while Democrat activist Scott Dworkin wrote in a post that Abbott “belongs in prison” for the migrant buses.

The far-Left Occupy Democrats group posted on Twitter that President Joe Biden’s administration ought to open a criminal investigation into Abbott’s migrant buses.

For months, Texas has bused thousands of border crossers to sanctuary jurisdictions like Washington, DC; New York City, New York; Chicago, Illinois; and Denver, Colorado. Abbott, estimates have suggested, is saving the state’s taxpayers billions in costs associated with illegal immigration by shifting the burden to other states with sanctuary policies.

(breitbart) – Three buses full of border crossers arrived from Texas to Vice President Kamala Harris’s Washington, DC, residence late on Christmas Eve. Harris, as with other migrants sent to her residence, did not greet the arrivals.

Amid freezing temperatures, some 130 border crossers arrived on buses to Harris’s residence — the Naval Observatory — sent by Texas Gov. Greg Abbott (R), who has been sending migrant buses to the location for months now.

According to reports, the three migrant buses were initially set to arrive in New York City on Christmas Day but were rerouted as a result of road closures because of the below freezing weather.

As the border crossers arrived at Harris’s residence, many were in nothing more than t-shirts and sandals and carrying blankets to keep warm. Soon after their arrival, the arrivals were bused to a nearby church.

The Biden administration is projected to oversee 2.6 million border crossers and illegal aliens arriving at the border next year — a figure that would eclipse this year’s record of about 2.3 million encounters.

Many of those apprehended are briefly detained before being released into American towns and cities. From February 2021 to October 2022, estimates indicate that the Biden administration has released some 1.4 million border crossers and illegal aliens into the U.S. interior.

A recent poll from the Los Angeles Times finds that a 65 percent majority of Americans say they oppose Biden’s expansive Catch and Release network, preferring to have border crossers and illegal aliens detained or sent to Mexico while awaiting their asylum hearings.