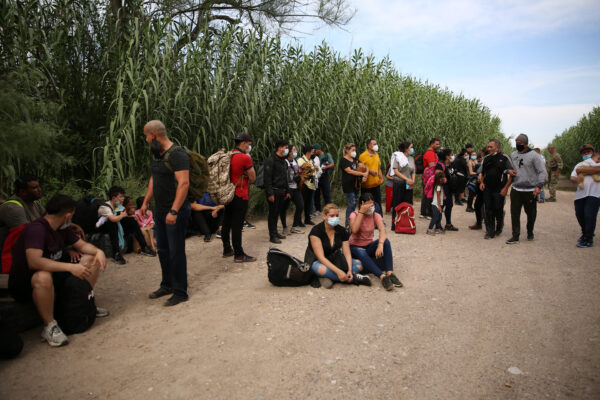 (breitbart) – Whether Title 42 ends or not, migrants say they are tired of waiting and surged across the Rio Grande into the Eagle Pass, Texas, area of operations. As many as 3,600 crossed so far this weekend — eclipsing last weekend’s total of just over 2,800 migrant apprehensions in the Del Rio Sector — according to a source operating within U.S. Customs and Border Protection.

Border Patrol officials called in all available agents in Eagle Pass on Sunday as increasing numbers of migrants crossed the border illegally from Mexico into Texas. Sunday evening, a large group of more than 250 migrants crossed near Normandy, Texas, while others streamed across into Eagle Pass.

Another group of approximately 300 migrants are crossing the border as this article published. And at a nearby hydro plant, agents found another large group of 100 migrants. That brings the total to more than 700 migrant apprehensions in a couple of hours on Sunday evening.

Agents identified most of the migrants crossing on Sunday evening as Honduran nationals. Some Colombian migrants also crossed.

Another source told Breitbart dozens of migrants have been waiting for hours for transportation as the Eagle Pass Station focuses its attention on large group crossings in more public areas. National Guard soldiers operating under Texas’ Operation Lone Star also are available to detain migrants until transportation eventually arrives.

On May 17, Del Rio Sector Chief Patrol Agent Jason D. Owens tweeted that agents under his command apprehended 2,849 migrants last weekend, Breitbart Texas reported. That number will be eclipsed as it appears the total could approach 4,000 this weekend.

The migrants did not appear to know or understand that the Title 42 will not end on Monday due to a federal court order. They expressed they were simply tired of waiting.

The source stated resources were not available to transport migrants from the border to the processing station. It also appears the NGOs who regularly shelter the migrants are overloaded as migrants are reportedly being dropped off at an Eagle Pass Stripes convenience store.

The crossings are not without danger. On Saturday, seven migrants were swept off their feet in the middle of the night forcing Border Patrol agents to jump into action to save their lives, Breitbart Texas reported.

BORSTAR agents utilized a throw bag, a water rescue board, and a personal flotation device to successfully all seven migrants in the darkness of night, Chief Owens stated.

Not all migrants are as lucky as these seven. Earlier this week, Breitbart Texas reported that Del Rio Sector agents recovered the bodies of three migrants. Two of the migrants drowned and agents found the third on a ranch near Uvalde, Texas.

Between April 1 and May 15 approximately 513,000 migrants illegally crossed the southwest border with Mexico. The number reflects apprehensions cited in the April Southwest Border Migration Report and unofficial numbers obtained from a law enforcement source within CBP.Bob Price serves as associate editor and senior news contributor for the Breitbart Texas-Border team. He is an original member of the Breitbart Texas team. Price is a regular panelist on Fox 26 Houston’s What’s Your Point?Sunday-morning talk show. Follow him on Twitter @BobPriceBBTX and Facebook.