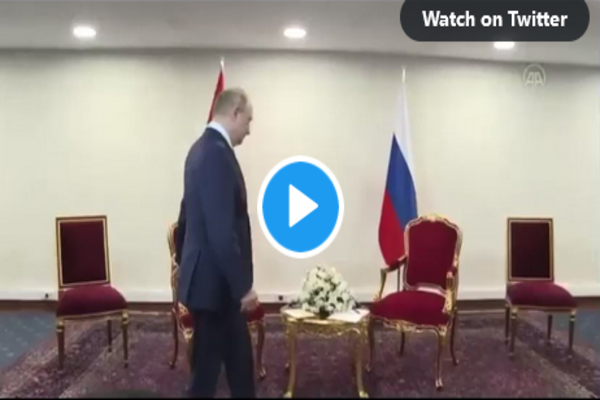 (AFP) – Russian missiles struck Ukraine’s key Black Sea port of Odessa Saturday, officials said, in an attack Kyiv described as a “spit in the face” of a deal signed by the warring neighbours a day earlier to resume grain exports blocked by the conflict.

The first major accord between the countries since the February invasion of Ukraine aims to ease the “acute hunger” that the United Nations says faces an additional 47 million people because of the war.

Nikolenko said Russia would bear “full responsibility for deepening the global food crisis” if the agreement were jeopardised by the assault.

“The enemy attacked the Odessa sea port with Kalibr cruise missiles. Two of the missiles were shot down by air defences. Two hit port infrastructure,” Sergiy Bratchuk, a representative of the Odessa region said in a statement on social media.

The hostility between Moscow and Kyiv had spilled over into Friday’s signing ceremony in Istanbul — delayed briefly by disputes about the display of flags around the table and Ukraine’s refusal to put its name on the same document as the Russians.

Ukraine had entered the ceremony by bluntly warning that it would conduct “an immediate military response” should Russia violate the agreement and attack its ships or stage an incursion around its ports.

The two sides eventually inked separate but identical agreements in the presence Guterres and Erdogan at Istanbul’s lavish Dolmabahce Palace.

Ukrainian President Volodymyr Zelensky later said the responsibility for enforcing the deal would fall to the UN, which along with Turkey is a co-guarantor of the agreement.

The agreement includes points on running Ukrainian grain ships along safe corridors that avoid known mines in the Black Sea.

Huge quantities of wheat and other grain have been blocked in Ukrainian ports by Russian warships and landmines Kyiv has laid to avert a feared amphibious assault.

Zelensky said that around 20 million tonnes of produce from last year’s harvest and the current crop would be exported under the agreement, estimating the value of Ukraine’s grain stocks at around $10 billion.

Russian Defence Minister Sergei Shoigu told Kremlin state media he expected the deal to start working “in the next few days” although diplomats expect grain to only start fully flowing by mid-August.

The United States, Britain, and the European Union hailed the Istanbul agreement while urging Moscow to abide by its rules.

Global alarm about grain has been accompanied by European fears that Russia is starting to use its stranglehold on energy exports as a geopolitical weapon in its standoff with the West.

The grain deal was signed one day after Russia’s restart of the Nord Stream natural gas pipeline eased concerns in Europe of a permanent shut off after a 10-day maintenance suspension.

Analysts say the partial resumption of gas supplies was insufficient to ward off energy shortages in Europe this winter.

The ornate halls of Istanbul’s Dolmabahce Palace felt far removed from east Ukraine’s Donbas war zone on another day of relentless shelling across the front.

Russia is trying to fight deeper into the war zone’s Donetsk region after securing full control of neighbouring Lugansk.

On Friday, the United States signed off on another $270 million in military aid to Ukraine, including rocket systems, artillery ammunition and armoured command posts.