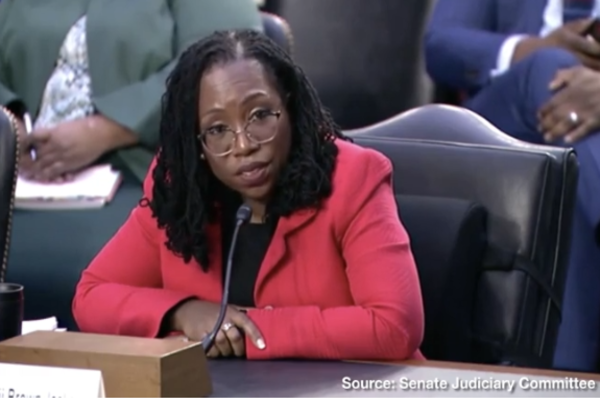 (breitbart) – President Biden’s Supreme Court nominee Ketanji Brown Jackson is involved in an anti-racist agreement that all parents of children at Georgetown Day School (GDS) must sign for enrollment, according to documents obtained by Breitbart News.

Jackson has been a board of trustees member at GDS since 2019 and a member of the Georgetown Day School community for about a decade.

While Jackson denied to Sen. Ted Cruz (R-TX) that Critical Race Theory (CRT) is taught at the National Association of Independent Schools (NAIS)-affiliated GDS during last week’s Senate confirmation hearing, the school demands that all parents sign a form called “New Enrollment Contract Clause,” which states the school has “made a commitment to work actively against individual and systemic racism.”

Reviewed by Breitbart News, the top of the form reads in full:

Parents acknowledge and understand that GDS is an institution that values diversity, equity, and inclusion, and that has made a commitment to work actively against individual and systemic racism, hatred, oppression, and bigotry of any kind. By signing this document, parents and students agree to join in the school’s commitment and to engage in actions and efforts in furtherance of these values and commitments within the GDS community.

The form also gives the parents resources to root out “systematic racism” and advance racial equity. “Below, please find a number of resources to consider as you discuss race and actively work against racism with your child(ren),” the form states before providing specific links to resources. Some of the school’s recommended resources:

Moreover, Jackson, in her role on the board, signed a letter to parents of students at GDS that requires them to sign an enrollment contract acknowledging and understanding that the school is committed to working against systemic racism.

From Document 02 – “13 tips on how to talk to children about diversity and difference”:

From Document 04 – “Talking to young children about racial bias”:

SPLC’s website, which GDS cites, includes traditional family principles and a Christian world view as the type of “hate” that should be canceled. SPLC’s website also lists organizations like the Alliance Defending Freedom, Family Research Council, and Pacific Justice Institute as “hate groups,” giving them the same designation as the KKK.

What is more, the GDS “Family & Student Handbook” shows just how involved Jackson is in teaching CRT at GDC. Below are some excerpts:

The newly obtained documents and information acquired by Breitbart News fly in the face of what Jackson told Cruz during his line of committee questioning at Jackson’s confirmation hearings.

“Is critical race theory taught in schools? Is it taught in kindergarten through twelfth [grade]?” Cruz questioned Jackson.

“I don’t know. I don’t think so,” she responded. “I believe it’s an academic theory that is at the law school level.”

During the questioning, Cruz also pointed to books that espouse CRT and are a part of GDS’s curriculum.

Cruz cited the books “Critical Race Theory, An Introduction” and “Antiracist Baby” as examples of these books.

GDS is affiliated with the National Association of Independent Schools (NAIS), which has promoted a race-based curriculum and grading system at professional development conferences for teachers at schools in their network, Breitbart News exclusively reported.