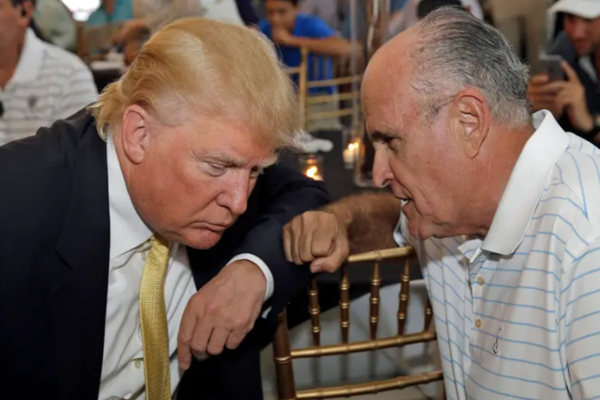 (breitbart) – Federal investigators executed a search warrant at Rudy Giuliani’s apartment in Manhattan as part of an investigation involving dealings with Ukraine, according to a Wednesday report.

The New York Times, citing “three people with knowledge of the matter,” reported that the feds executed a search warrant at the lawyer’s Upper East Side apartment as part of the investigation into his dealings with Ukraine — specifically, the accusations that he “illegally lobbied Trump administration in 2019 on behalf of Ukrainian officials and oligarchs.”

“One of the people said the investigators had seized Mr. Giuliani’s electronic devices,” the Times reported, noting the significance of executing the search warrant given Giuliani’s status as a lawyer for the former president, particularly:

While the warrant is not an explicit accusation of wrongdoing against Mr. Giuliani, it shows that the investigation has entered an aggressive new phase. To obtain a search warrant, investigators need to persuade a judge they have sufficient reason to believe that a crime was committed and that the search would turn up evidence of the crime.

Spokesmen for the F.B.I. and the U.S. attorney’s office declined to comment.

In September 2019 interview on CNN’s Cuomo Primetime, Giuliani said he asked Ukraine to look into then-candidate Joe Biden before clarifying that he “asked them to look into the allegations that related to my client, which, tangentially, involved Joe Biden in a massive bribery scheme, not unlike what he did in China.”

“The only thing I asked about Joe Biden is to get to the bottom of how it was that Lutsenko, who was appointed, dismissed the case against AntAC,” he said.

“So you did ask Ukraine to look into Joe Biden?” Cuomo asked, prompting an, “of course I did” from the former New York City mayor.

“No, I didn’t ask them to look into Joe Biden,” Giuliani countered. “ I asked them to look into the allegations that related to my client, which, tangentially, involved Joe Biden in a massive bribery scheme, not unlike what he did in China.”

Giuliani traveled to Ukraine to meet with Shokin and other former prosecutors, according to the New York Times. He was reportedly filming a documentary with the One America News Network (OANN), according to ABC News.

Giuliani’s interest in Ukraine stems from his effort to defend President Trump against claims of “Russia collusion,” which were ultimately debunked by Special Counsel Robert Mueller’s report, which was released in April. Some allegations of “Russia collusion” were reportedly fueled by Ukrainian sources working with Democrats, allegedly through a Democratic National Committee (DNC) contractor and former British spy Christopher Steele. Giuliani apparently hoped to use information gathered in Ukraine to defend Trump by explaining how the “Russia collusion” narrative began.
In addition, Giuliani became interested in the story of former Vice President Joe Biden’s intervention in Ukraine to ensure that Shokin was fired, during a time when Biden’s son, Hunter, was on the board of Ukrainian gas company Burisma.

“As Biden himself later recalled, the Vice President personally threatened Ukraine with the loss of $1 billion in U.S. loan guarantees unless Shokin was fired in 2016,” as Breitbart News reported.