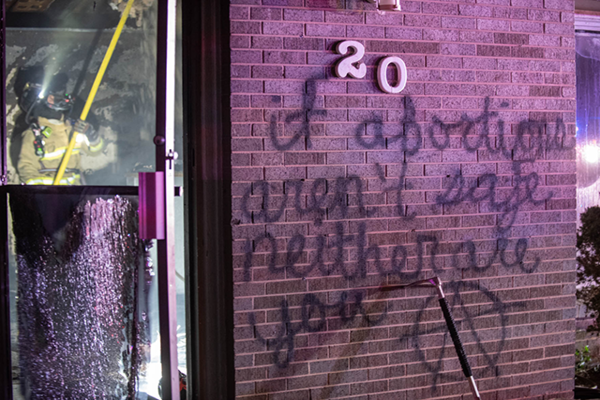 (breitbart) – A faith-based center for pregnant women in Colorado was vandalized and burned Saturday, and authorities are looking for those responsible.

Law enforcement officers were alerted to a fire at Life Choices in Longmont that morning, and upon arrival they saw the building was on fire and had messages scrawled on it that referenced the overturning of Roe v. Wade, according to the New York Post.

In a social media message, Longmont Fire, Police and Community Health and Resilience said the building sustained “fire and heavy smoke damage,” noting the property had been vandalized with black paint.

The agency added the case was being investigated as arson.

One photo showed the phrase, “Bans Off Our Bodies” spray painted at the entrance with the anarchy symbol above it on the wall.

In another image, someone had painted, “If abortions aren’t safe neither are you” on the brick building:

The agency announced in an update Saturday the FBI had joined local officials to investigate.

On Friday, the United States Supreme Court overruled Roe v. Wade, and held in the Dobbs case that the Constitution did not provide a right to abortion, returning the issue to the states, Breitbart News reported:

Roe was handed down in 1973 in a 7-2 decision, holding that the U.S. Constitution includes a constitutional right to abortion, despite the fact that abortion is not found in the text, structure, or history of the Constitution, and the nation went more than 180 years without ever noticing it existed. It has been one of the most divisive legal issues in American history.

Meanwhile, authorities began combing through surveillance footage trying to locate the person or persons responsible for the apparent arson.

“The attacks follow a leaked Supreme Court decision that revealed Roe v. Wade may be overturned this month. If overturned, abortion would no longer be protected by the federal government but would still be legal in many states,” the outlet said at the time.