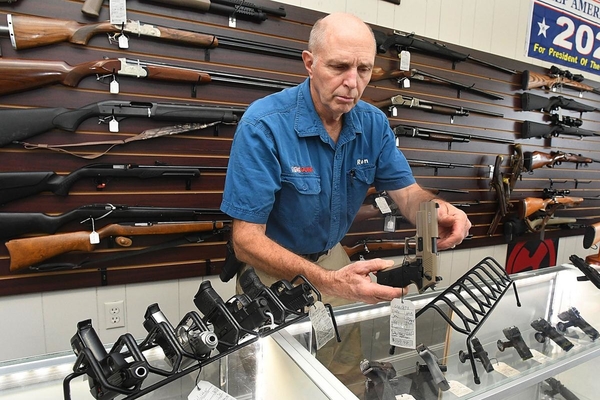 The Washington Times quoted GOA senior VP Erich Pratt suggesting the recategorization of gun sales is “the latest attempt by anti-gun lunatic activists to pressure corporations into collecting their own business partners’ data in a way that threatens their privacy, as well as the privacy of the millions of customers who rely on these services for electronic transactions each year.”

The NRA’s Lars Daleside said, “With a few keystrokes, this new code creates a list of people who purchased firearms, ammunition and firearm-related accessories – that’s the very definition of a registry. It’s an attempt to outsource the creation of a gun owner registry, something that the federal government is prohibited from doing.”

And SAF executive VP Alan Gottlieb described the recategorization efforts as “another attempt to disrupt and demonize people from buying firearms and ammunition by violating privacy rights and creating a database of gun owners.”

Gottlieb added, “It is being done to hurt online sales. Guns.com and gunbroker.com and others are targets. The gun prohibition lobby wants to shut down all Internet sales even if the firearms have to be delivered from local dealers with background checks.”

Breitbart News reported that Visa issued an announcement on September 10, 2022, that it would be recategorizing the way purchases from gun stores are labeled.

This announcement came after weeks of pressure from Gabby Giffords, her gun control group, Democrat lawmakers in New York, and New York Gov. Kathy Hochul (D) — all claiming that labeling gun purchases under categories such as sporting goods or general merchandise was not sufficient.

Hochul went so far as to contend that major credit card companies need to take action and “do their part” for gun control.

Writing in the New York Times’ Deal Book, Andrew Ross Sorkin, a proponent of recategorizing gun sales, suggested the new labels could be used by banks to halt payment on guns if banks so choose.

Sorkin suggested that “the payments industry needs to develop and refine software algorithms for identifying suspicious activity based on the merchant codes.”

He noted that once the algorithms have been developed, “Banks could then either allow those transactions, or block them and file suspicious activity reports with the Treasury Department’s Financial Crimes Enforcement Network, which would ideally also create a system to quickly forward that information to local law enforcement and the F.B.I.”