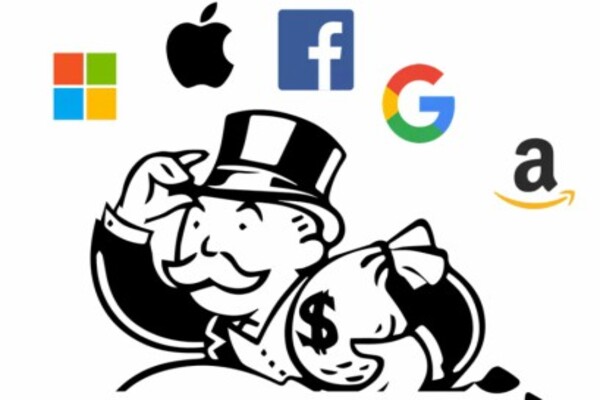 (breitbart) – Republicans think a “red wave” is inevitable in November. But the Democrats still have one big advantage: the ever-tightening grip of Big Tech censorship, which will be used to prevent undecided voters from encountering even the most mainstream conservative news in the runup to the next election. Republicans will have a strong message — but what if voters are prevented from hearing it?

In the runup to the 2020 U.S. presidential election, Google completely suppressed Breitbart News from its search results. Compared to 2016, Breibart News went into the 2020 election with a 99.7 percent reduction in visibility for its links on Google search. The censorship was so severe, no-name blogs with plagiarized headlines and content would appear in search results before the original Breitbart News articles. On searches for the term “Joe Biden,” Google cut visibility on Breitbart News links to zero.

Then, a few weeks before the election, Big Tech teamed up to suppress one of the biggest stories of the cycle: the Hunter Biden laptop story. A post-election poll found that 17 percent of Biden voters would have reconsidered their decision had they been aware of the laptop story alone, not counting the hundreds of Breitbart News stories voters didn’t have access to due to Google censorship.

Biden’s margin of victory in three swing states was less than a percentage point, making tech censorship a pivotal factor in the outcome. There is no law preventing Silicon Valley from not only repeating this plan in 2022, but scaling it up to a massive level – and that’s exactly what they are doing. The groundwork is already being prepared, in a number of ways:

No matter how mainstream you are, you aren’t safe. NewsGuard, the establishment “misinformation” watchdog that received funding from the Pentagon and whose software is being rolled out by millions of schoolteachers across the country, recently downgraded Fox News in its rankings of trustworthy and untrustworthy news sources.

NewsGuard users will now see a red warning label next to Fox News links all around the internet, signaling to users that the source is considered untrustworthy by the organization, which was set up by former establishment media figures Steven Brill and L. Gordon Crovitz in 2018, in the early years of the media-concocted “misinformation” panic.

Fox News and Breitbart News have now both received the negative “red” rating from NewsGuard. This means that, going into the 2022 midterm elections, NewsGuard is warning its users not to read the two leading conservative-leaning sources of online news.

Naturally, the sources that pushed the Russiagate hoax and said the Hunter Biden laptop was “Russian disinfo” — a claim repeated by NewsGuard’s co-founder — receive no such warning label.

#2 Facebook Suppressing The News — If The Wrong Side Is Winning, Call Off The Game

Facebook has an answer: if conservative media is winning the news war on its platform, it will simply suppress all news at the same time. This month, the Wall Street Journal reported that the platform is shifting resources away from its News Tab and news distribution, and towards a “creator economy.” This means that news will be featured less frequently to users, whether they ask for it or not. This is a way of preventing unwanted narratives from reaching the public, at the very moment when news coverage of the failures of Democrat rule in D.C. will be ramping up.

This is a repeat of what Facebook did after the 2016 election when it reduced the visibility of political posts — a change that resulted in engagement on Donald Trump’s page dropping by almost half.

Meanwhile, in the media, the steady drumbeat of the “misinformation” panic continues. Taxpayer-funded NPR is running a whole series about the media-concocted crisis, with a near-exclusive focus on stories that spread in conservative circles. “Misinformation” and “disinformation,” like “fake news,” wasn’t a buzzword before Trump won, but now it is everywhere: it is pushed by think tanks, it is pushed by government-funded agencies, it is debated by congressional committees, it suddenly becomes a new responsibility of the federal government. This is how elites manufacture a crisis — every institution they control saturates the information environment to create a sense of panic.

You can determine the purpose of such a panic from its targets. Ask almost any prominent conservative or even journalists not in alignment with the far left if they’ve received a warning on social media for spreading “misinformation,” and they will likely say yes. The victims include journalists like Alex Berenson, Senators like Rand Paul, and of course the former President. Leftist misinformation, whether it concerns “Russiagate,” biological gender differences, or police and crime statistics, is, naturally, never called out.

#4 Regulatory Gridlock — No Recourse For Citizens

The goal of the misinformation panic has always been to delegitimize conservative viewpoints and give Big Tech a pretext to censor them. So long as the Supreme Court continues to block efforts to address corporate censorship, this trend will only worsen. As things stand, tiny local radio and TV stations are subject to more stringent political neutrality requirements than Google, Facebook, or Twitter.

Previous regulators, perhaps overzealously, sought to prevent even the smallest communication platforms from unduly influencing an election, but today’s Supreme Court seems fine with the most powerful platforms that have ever existed doing so. Carefully considered news tech laws aimed at giving users some measure of due process against the tech giants, most notably the one passed in Texas, have yet to make it past the Supreme Court.

#5 The Institutionalization of Censorship — Facebook’s $150 Million ‘Oversight Board’

With the actual courts of the U.S. having their hands tied, Big Tech is funding a parallel justice system to take its place. Facebook recently announced $150 million in new funding for its “Oversight Board,” the private body where users can go to beg for their censored accounts back. Naturally, this “Facebook supreme court” is a farce — filled to the brim with leftists and globalists, it failed to overturn the most egregious act of political censorship ever conducted by Silicon Valley, the blacklisting of Donald Trump.

Like the “misinformation” panic, the point of the Oversight Board is to give a veneer of process and legitimacy to Facebook’s suppression of non-progressive viewpoints.

Going into the 2022 midterm elections, if Silicon Valley gets its way, voters online will see only what the elites want them to see. That January 6 was the worst attack on democracy ever. That Republicans killed people by pointing out masks don’t work. That women in red states are being driven to coathanger abortions.

In short, Silicon Valley will ensure that the misinformation of the establishment gets a megaphone, while any conservative counterpoints are silenced. We already know from 2020 that this works. The question is, what are Republicans going to do about it?