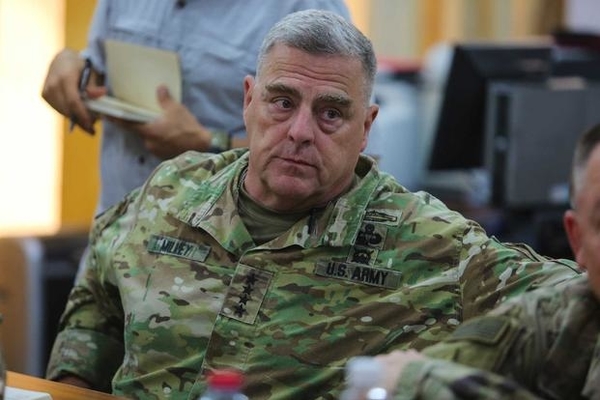 (breitbart) – Biden Pentagon leaders at a hearing on Tuesday lashed out at Republican lawmakers who grilled them on critical race theory spreading in the military, with the top military officer saying he was offended by accusations the military is becoming “woke.”

“I personally find it offensive that we are accusing the United States military, our general officers, our commissioned, non-commissioned officers of being ‘woke’ or something else because we’re studying some theories that are out there,” Chairman of the Joint Chiefs of Staff Army Gen. Mark Milley said at the hearing.

His response came after several lawmakers queried Milley and Defense Secretary Lloyd Austin on why critical race theory is being spread within the military.

Later in the hearing, Rep. Mike Waltz (R-FL) then cited a letter from the West Point superintendent that acknowledged that critical race theory was part of the curriculum for a class at West Point, in addition to there being a lecture at West Point on “whiteness and white rage.” Austin conceded, “That is something that should not occur again.”

However, Milley — invited by a Democrat lawmaker to respond — chimed in with a staunch defense of studying critical race theory, saying he thought it was important for military leaders to be “widely read.”

“I want to understand white rage, and I’m white,” he said, referencing the January 6 Capitol riot. “What is it that caused thousands of people to assault this building and try to overturn the Constitution of the United States of America?”

Milley added he has read Mao, Marx, and Lenin, but that it did not make him a Communist.

“So what is wrong with understanding…about the country for which we are here to defend?” he said.

His response was cheered by leftists on social media as a defense of critical race theory:

Earlier in the hearing, Republican lawmakers also questioned the Pentagon’s focus on extremism and trying to root out “extremists” from the military without having a definition of what “extremism” is.

Rep. Vicky Hartzler (R-MO) said she has sent two letters to Austin asking him how the Pentagon defines extremism without any response. She asked him directly: “Does the Department of Defense have a clear definition of extremism?”

Hartzler asked how he ordered an entire day to do training on extremism without having a definition.

“The purpose was to–to–to help–to have a discussion with–with our troops and our leaders on the issue extremism,” he said. “And that was very productive. And–and, again, we were focused on those behaviors that don’t–that are not in congruence with–with our values in the military.”

When asked if someone’s support for former President Donald Trump could be viewed as “extremism,” Austin responded, “As I said earlier, this is not about politics. I went our troops to–to–to participate in our political system. That’s what they’re fighting to defend and–and I will also say that–that we will continue to be a diverse–a diverse and inclusive organization. And that’s what the United States military is all about.”

Hartzler responded, “So, I would just encourage us not to entrench on our liberties.”