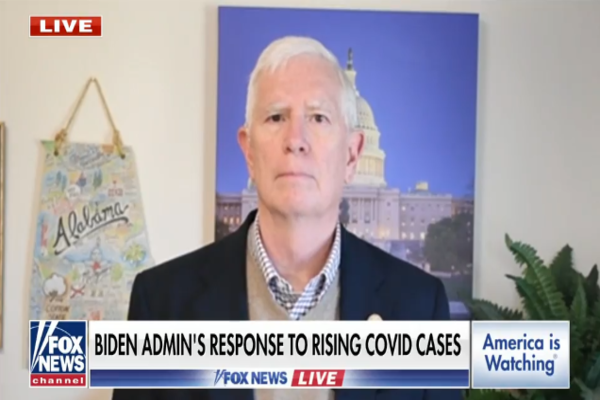 (breitbart) – Representative Mo Brooks (R-AL) claimed that the COVID-19 pandemic was a manmade “bioweapon” created by the Communist Chinese during a Saturday appearance on the Fox News Channel.

Brooks, a candidate for U.S. Senate in Alabama, told FNC’s “Fox News Live” that it would be something we would have to “learn to deal with” despite a reluctance to discuss the pandemic by Democrat leaders.

“[T]he bottom line is this — and people need to understand this: This is a bioweapon that was created in the Wuhan bioweapons lab of the Communist Chinese Party, in conjunction with the People’s Liberation Army,” he said. “It’s going to be around for a long time, and we have to learn to deal with it. We cannot shut ourselves up, which is one of the policies that unfortunately has done so much damage to our economy at the assistance of Democratic governors, mayors, and to some degree, President Joe Biden. That isn’t going to work.”

FNC’s Jacqui Heinrich questioned the merits of Brooks’ claim, adding there was “not any proof” of the claim it was a “bioweapon.”

Brooks insisted he had seen proof and doubled down on the claim.

“I have seen enough information — some of it classified, some of it not, some of it consisting of private meetings with someone who worked in that program in Communist China, who was a part of their bioweapons program, telling us what was transpiring. It is a bioweapon. It is manmade, and it was manmade at the Wuhan bioweapons lab. Now, can I say that with a hundred percent certainty? No. But I can say that with a high, high, high degree of confidence, and that’s my belief.”