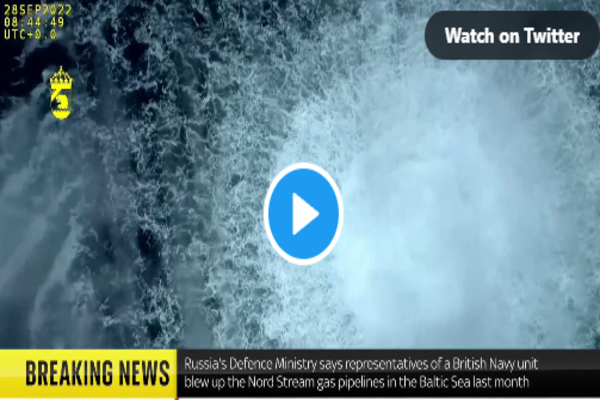 (breitbart) – Britain’s Royal Navy helped to execute the “terrorist attack” which damaged the Nord Stream gas pipelines from Russia to the European Union, the Russian defence ministry has alleged.

The Russian ministry levelled the allegation at Britain’s senior military service in a news bulletin centred primarily on what they claimed was an attempted “terrorist attack against the ships of the Black Sea Fleet and civilian ships” on Saturday morning by Ukrainian drones in the vicinity of Sevastopol, Crimea, which was annexed by Moscow in 2014.

“The preparation of this terrorist act and the training of military personnel of 73rd Marine Special Operations Centre were carried out under supervision of British specialists in the city of Ochakov, Nikolayev region in Ukraine,” the Russian statement, posted on Telegram, asserted, without providing supporting evidence.

“According to available information, representatives of this unit of the British Navy took part in the planning, provision and implementation of a terrorist attack in the Baltic Sea on September 26 this year — blowing up the Nord Stream 1 and Nord Stream 2 gas pipelines,” they added — again, without providing supporting evidence.

Of the attempted “terrorist attack” against the Black Sea Fleet, the Russians claimed that their vessels — which they said were “involved in ensuring the security of the ‘grain corridor’ as part of an international initiative to export agricultural products from Ukrainian ports” — were targeted by “nine unmanned aerial vehicles and seven autonomous maritime drones.”

They claimed all of the aerial drones and most of the maritime drones were “annihilated by shipborne weapons and maritime aviation” but that one minesweeper and a floating net boom sustained “minor” damage.

Russian forces have themselves been accused of targeting Ukrainian infrastructure — particularly energy infrastructure — with Iranian drones in recent weeks, causing substantial degradation of the invaded country’s grid as the winter months approach.