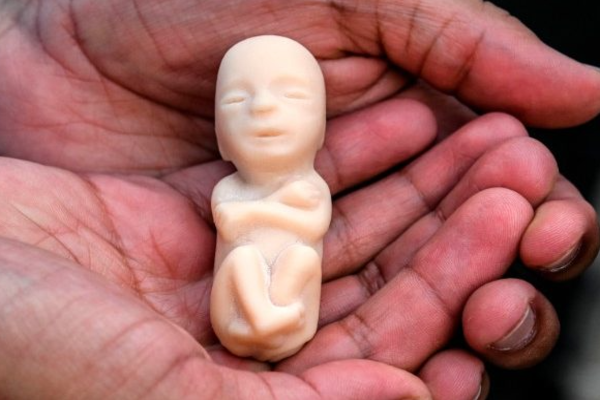 (breitbart) – Having aborted a child — or several — is something to be “thankful” for, according to a Thanksgiving piece in The Nation that claims many “celebrate” the experience, while slamming the “utter disregard for all Indigenous people” in the past that “fuels the same systems of white supremacy that dehumanize all of us today.”

The Thanksgiving day essay, titled “We’re Thankful for Our Abortions,” was penned by Nikiya Natale, deputy director of We Testify, a group created by the National Network of Abortion Funds (NNAF) that advocates for women who have undergone abortions.

Her “passion” for her organization’s work “stems from her own multiple abortion experiences,” according to the group’s website.

The Thursday article claims that many of those who have had abortions “celebrate their experience” and goes on to detail the “thankfulness” of a handful of women for their abortions.

Calling Thanksgiving a “complicated” holiday, the author questions why the country bothers celebrating it.

“This year I find myself reflecting not only on all the people I love and cherish but also on the outcomes and impact of the midterm elections, and on why our nation celebrates the complicated holiday of Thanksgiving at all,” she writes.

Natale then slams the national festivity, which she describes as “founded on the unforgivable genocide of Native Americans.”

As a result of her “commitment to justice for all people,” celebrating that which she is most thankful for, she claims, is a “difficult” thing.

“[T]he harsh reality is that the utter disregard for all Indigenous people in the 1800s fuels the same systems of white supremacy that dehumanize all of us today,” she charged.

According to the author, “Black lives are taken by the police and the prison-industrial complex, any sense of LGBTQ+ peace and tranquility has been obliterated by gun violence and hate, and, ultimately, the small promise of abortion access guaranteed by Roe v. Wade was stripped away by an illegitimate Supreme Court.”

“When I look at the state of this nation, the anger piles up, and my gratitude is depleted,” she adds.

Despite that, Natale expresses gratitude for her multiple abortion experiences and for having access to abortion “while it was still legal” in Texas.

She admits that when expressing “gratitude for my abortions,” sometimes she (and others) are “met with questions and chiding from family members or loved ones who believe that we shouldn’t ‘celebrate’ or be ‘thankful’ for our abortions” — even those who are “pro-choice.”

“But I am thankful for both of my abortions,” she writes, calling it something she has “immense gratitude for,” especially considering the current “political climate.”

But the author is not alone, she claims.

“Many people who have abortions celebrate their experience,” she writes.

The essay continues with her and her colleagues at We Testify “sharing appreciation for our abortions,” adding that “[n]o matter if it’s their first abortion or fourth, people should be supported in whatever they decide, every time.”

Asked how they came to “feel good celebrating and being thankful” for their abortions, the group’s staff each offered their own thoughts.

We Testify’s Boston-raised operations coordinator Savannah Williams, who is described as an “aspiring abortion storyteller,” discussed the upcoming “sixth anniversary of my second abortion.”

“When I think about how far I’ve come and the things I’ve been able to do—such as finishing college and starting my small business—I am grateful that I was able to do them without having to worry about making ends meet and struggling to care for two small children whom I wasn’t ready for,” she said. “I am thankful for the freedom of self.”

Noting that some may call her decision “selfish,” Williams says she does not.

“I am able to care for myself and live free from anxiety and parts of my life that I have needed to leave behind,” she said. “I have deep gratitude that I was able to make a decision that was good for me.”

“I felt compelled to have my abortions, not because of what I thought other people might think of me, but because it was what I needed to do,” she added. “I am grateful for the bravery I showed myself.”

Williams —  who was already pregnant during her high school graduation — admits she had originally never imagined herself as someone needing an abortion because, she insisted, “I never imagined myself as being pregnant at all.”

“When I realized that I was pregnant both times, I was surprised,” she said. “It made me realize that people can be pregnant at any time.”

She details becoming sick in 2015 and needing emergency surgery which she credits with saving her life, though she admits it was not her first abortion.

Martin has since offered encouragement to patients awaiting abortions who previously underwent the procedure and “felt conflicted due to stigma against multiple abortions.”

She has also learned to “celebrate my life, my abortions, and how thankful I was for each abortion I had.”

“Why can’t there be an abortion narrative where people are happy, had choice, and created the life that they wanted?” she asked.

The women also addressed how they learned to “unlearn the shame and stigma” towards those who have undergone multiple abortions.

Emma Hernández, the group’s media relations manager, describes her first abortion at 21, along with the feeling that she “had all the reasons to not continue with the pregnancy.”

“I was in my senior year of college, didn’t have a job or a car, my father had recently been deported, and I couldn’t fathom a lifelong tie to a toxic relationship,” she said.

“If any life circumstance necessitated an abortion, surely it was mine,” she added.

Yet, eight years later she found herself pregnant once again, with all her reasons for aborting years earlier no longer applicable.

“It was a different situation entirely. All the things that my first abortion had made possible were things that, on paper, now made me an ideal candidate for parenthood,” she admitted. “I was now a financially stable homeowner with a healthy relationship, an established career, and on the brink of completing my graduate studies.”

“But one thing remained the same—I still didn’t want to be a parent,” she added. “I struggled through the morning sickness and the realization that some part of me still believed abortions, especially multiple abortions, had to be justified.”

The essay follows the Supreme Court overruling of Roe v. Wade in June, holding in the Dobbs case that the Constitution does not include a right to abortion and returning the issue of abortion laws and regulations to state legislatures.

The landmark decision has since sparked violent public upheaval across the country, as Democrats, the mainstream media, and members of the far left continue their attacks on the pro-life movement and its supporters.

In September, ABC’s “The View” co-host Whoopi Goldberg referred to the unborn child of a mother having “difficulty” with a pregnancy “requiring” an abortion, as a “toxic thing” within its mother.

In July, Rep. Kathleen Rice (D-NY) claimed the word “abortion” has been “weaponized” by pro-lifers to “raise the emotions” of others, as she called for an end to the use of the word in favor of one less “negative” in order to “have a real conversation” on the issue.

Last year, abortion was the leading cause of death globally, with nearly 43 million unborn babies killed in the womb, according to data provided by Worldometer, compared with 8.2 million deaths from cancer, five million from smoking, 1.7 million of HIV/AIDS, 1.3 million from traffic fatalities, and one million from suicide.