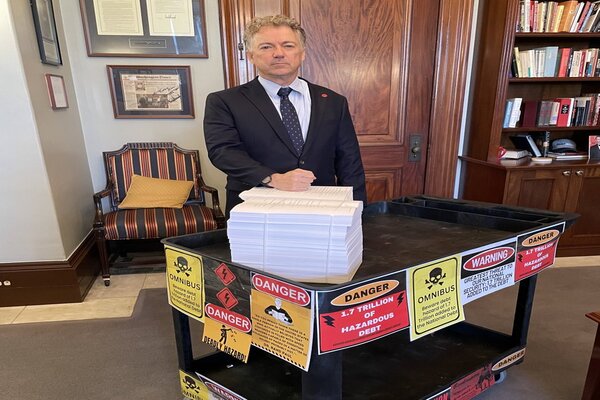 (breitbart) – The House passed the $1.7 trillion omnibus bill Friday by a vote of 225-201-1. Nine Republicans voted for the bill, which was released just days earlier.

The 4,155-page bill will now be signed into law by President Joe Biden before Friday night’s deadline for a government shutdown.

“This bill is further proof that Republicans and Democrats can come together to deliver for the American people, and I’m looking forward to continued bipartisan progress in the year ahead,” Biden said about its passage.

Many of the GOP “yes” votes came from outgoing members who lost their reelection bids in the 2022 cycle or are retiring.

The House rushed to vote on the bill before the looming government shutdown Friday night. The omnibus passed the Senate by a vote of 68-29 on Thursday afternoon. Eighteen Republican Senators voted for the 4,155-page bill.

By Wednesday, 31 House Republicans had signed onto a letter vowing to block legislation from any GOP senator who voted for the massive omnibus spending package.

Critics of the bill opposed the $45 billion aid to Ukraine. That $45 billion is in addition to the $66 billion of taxpayers’ money lawmakers have already approved for Ukraine.

The 31 House conservatives also opposed the bill because the package maintains the status quo in Washington, DC, by spending money the nation does not have. America’s debt stands at over $31 trillion.