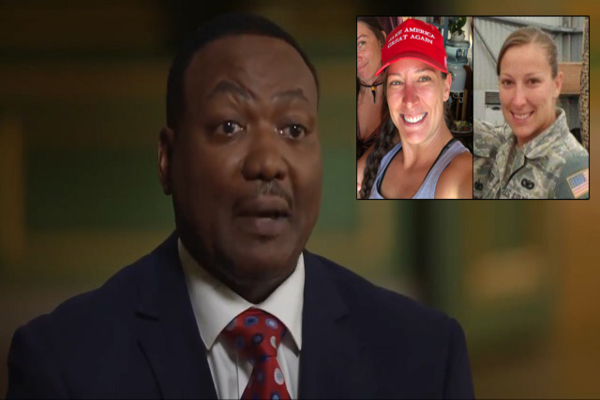 From The Daily Mail:

The Capitol police officer who fatally shot Ashli Babbitt during the January 6 Capitol riot said his actions showed ‘utmost courage’ and that he ‘saved countless lives.’

Speaking hours after he was publicly identified for the first time, Lt Michael Byrd went on the defensive during an interview with NBC News star Lester Holt Thursday.

Explaining his decision to finally come forward, Byrd – a 28-year veteran of the force – said: ‘I showed the utmost courage on January 6, and its time for me to do that now.’

Referring to the 60 to 80 members of Congress trapped by the riot, he added : ‘I know that day I saved countless lives.

‘I know members of Congress, as well as my fellow officers and staff, were in jeopardy and in serious danger. And that’s my job,’ Lt. Byrd said.Wow, what heroism!

Babbitt was an unarmed 5’2″ woman who weighed 118 pounds.

Not even one member of Congress was assaulted or hurt physically at any point during the mostly-peaceful protest on Jan 6.

No other officer shot any of the other protesters, many of which were involved in far more violent scuffles with police. There was a large heavily-armed squad of police nearly right behind Babbitt when Byrd shot towards a crowd of people and killed her.

In a particularly sickening moment, NBC News’ Lester Holt helped the killer cop portray himself as the victim by questioning whether he was subject to “racist” attacks on the internet.

“There were some racist attacks,” Byrd said.

The only “racist attack” was Byrd’s execution of Babbitt!

Byrd has “racism” to thank for his job as he should have been fired years ago for leaving his loaded Glock 22 in a Capitol bathroom but instead was let off easy!