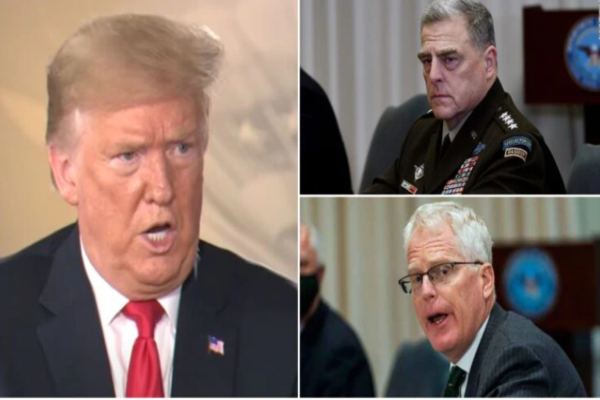 Before President Donald Trump was scheduled to leave office after the dubious election results were tallied and investigations were stonewalled, Trump wanted to remove troops from various third-world hellscapes as a final love letter to the American people.

The military-industrial complex snapped into action to prevent this from happening.

It reportedly began when influential Trump advisor John McEntee handed retired Army Col. Douglas Macgregor a piece of paper with a checklist of foreign policy directives from the president that read as follows:

“1. Get us out of Afghanistan.

3. Complete the withdrawal from Germany.

Macgregor was brought into the administration because of his noted opposition to America’s interventionist foreign policy. He had become a favorite of the Trump base after appearing repeatedly on Fox News’ “Tucker Carlson Tonight” to call for troop withdrawal overseas.

One of Macgregor’s appearances can be seen here:

McEntee, who had risen up the ranks due to his loyalty to the president, had been tasked with bringing Macgregor on board as a Trump advisor in the final days of the administration.

“Colonel, the president wants to know if you’ll come in and be senior adviser to the acting secretary of defense,” McEntee said during a meeting between the two men in the White House.

“Why is that?” Macgregor asked.

“The president thinks that you can help extricate us from Afghanistan, Iraq, Syria and potentially other places,” McEntee replied.

Macgregor showed some hesitancy due to the scope of the request. He told President Trump that he needed an official order, and the memo came on Nov. 11 formalizing his policies of immediate withdrawal.

Acting United States Secretary of Defense Christopher Miller immediately sprung into action to prevent Trump’s will from being realized. Assisted by Joint Chiefs of Staff Chairman Gen. Mark Milley, the plot would soon come into focus.

“Many would rally to push back — sometimes openly and in coordination, at other times so discreetly that top Trump administration officials had to turn to classified intercepts from the National Security Agency for clues,” Axios wrote, admitting that Trump’s various peace plans had been “subdued, slow-rolled, and detoured by military leaders” throughout his presidency.

“They literally would not give you any information. And the information they gave you was bullsh*t,” Bannon said. “In every presentation, they say you’re 18 months away from turning the war around. Always. You’re always 18 months away.”

Jim Jeffrey, Trump’s special envoy to Syria and the anti-ISIS coalition, proudly boasted about he and other colleagues committed treason throughout Trump’s presidency so troops could keep dying for the profits of defense contractors.

“We were always playing shell games to not make clear to our leadership how many troops we had there,” Jeffrey told DefenseOne after the Biden coup, adding that the troop number in Syria is “a lot more than” the approximately 200 that Trump authorized to stay there in 2019.

Additionally, hawks like Secretary of Defense Mike Pompeo aided in the plot – either wittingly or as a hapless dupe of deep state saboteurs. Pompeo boxed out foreign policy expert Will Ruger from the administration in early 2020. Ruger was a McEntee favorite who wanted troops removed from Afghanistan. Pompeo, a war hawk who rolled out the red carpet for neocon Never Trumpers to enter Trump’s White House, kept Ruger out at a time when Trump desperately needed an ally.

Macgregor became aware of the deep state plot after he noticed that Trump’s memo had been switched around. Suddenly, the date for withdrawal in Afghanistan was no longer Dec. 30. It was now set for Jan. 15. The withdrawal timetable in Somalia had similarly been changed to Jan. 15.

Even though the dates had been changed, the military bureaucracy and its servants in Congress were reportedly apoplectic. Senate Majority Leader Mitch McConnell was particularly enraged. Miller, despite advertising himself as an opponent of the wars in Iraq, Afghanistan and Syria, decided to join in the plot rather than face the institutional pressure for doing the right thing.

Eventually, Miller, with the assistance of Milley and National Security Adviser Robert O’Brien, were able to convince Trump to tone down his plan for full removal of troops from Afghanistan. Trump acquiesced to keeping 2,500 troops in the country, but those totals would not even be reached by the time he left office.

Other reports show that Milley was openly subverting the president and had gone rogue in his role leading the Joint Chiefs of Staff. He and his underlings were reportedly undermining Trump’s choice in civilian staff to foreign adversaries. Milley has unsurprisingly kept his role with the Joint Chiefs after Biden seized power with the assistance of military force.

Now, Biden has announced a troop withdrawal from Afghanistan on Sept. 11, 2021, which marks the two decade anniversary of when the global war on terror began. Expect some chicanery from the deep state before that planned date so these Pentagon swamp rats can continue profiting mightily from the blood of our nation’s bravest heroes.