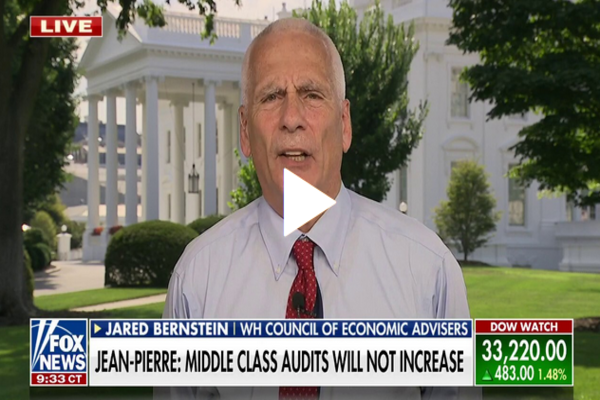 (breitbart) – One of the main storylines of the passage of the so-called Inflation Reduction Act (IRA) was hiring 87,000 new Internal Revenue Service (IRS) agents.

However, the White House Council of Economic Advisers’ Jared Bernstein insists those resources will not be used to audit households earning under $400,000 and will target those engaging in tax evasion, not tax avoidance.

During an appearance on FNC’s “America’s Newsroom,” Bernstein some of the press reporting.

“So, look, I think that this reporting has been pretty convoluted,” Bernstein said. “Here, I want to quote something from the Commissioner of the IRS, Commissioner Rettig. These resources, he’s talking about the – what you’re referring to is resources in the Inflation Reduction Act to reverse what I call a shadow tax cut, which is the long-term defunding of the IRS to facilitate tax evasion by wealthy evaders.”

“Here’s what Commissioner Rettig said: ‘These IRA resources are absolutely not about increasing audit scrutiny on small businesses or middle-income Americans as we have been planning’ – and he’s the Commissioner, so he knows what they’re planning – ‘our investment of these enforcement resources is designed around Treasury’s directive that audit rates will not rise relative to recent years to households making under $400,000,’” he continued.

“In other words, IRA resources will not add to audits for households under $400,000, and those same households will not see one penny increase in their taxes based on proposals in the Inflation Reduction Act. So, let’s just make sure the record’s clear on that point,” Bernstein added.